The 4th LiFFt Eurasian Literary Festival of Festivals will take place in Baku from September 30 to October 3.

A press conference timed to the festival has been held at Heydar Aliyev Center.

The Festival is a public initiative and an international educational project, which unites the LiFFt literary festivals of Russia and Eurasia. It covers 98 countries and five billion people. The festival's organizing committee includes such famous writers as Olzhas Suleimenov, Margarita Al, Sergey Biryukov, Nadao Sendao, Vladimir Delba and Alexander Ratkevich.

The project organizers include LiFFt Foundation for the Promotion of the Cultural Projects of the Peoples of Eurasia. The co-organizers of the festival in Azerbaijan are the Heydar Aliyev Center and the Eurasian Peoples' Assembly.

The winner of the 2018 Festival in Sochi, which brought together 170 writers from 27 countries, was the representative of Azerbaijan, Varis Yolchuyev. According to the rules, the winning country is traditionally given the honor of hosting the next festival.

The press-conference was attended by Margarita Al, the author of the idea and the President of the LiFFt International Literary Project and the chairperson of the Organizing Committee of the festival, as well as the main coordinator of the project, writer Varis Yolchuyev, German photographer and artist Andrei Alexander, the coordinator for Azerbaijan Nigar Hasanzade and the director of the Baku Book Center Gunel Anargizi, who talked about the holding of the Festival in the country and answered numerous questions from journalists.

Margarita Al expressed confidence that the Festival in Baku will be one of the highlights of the literary world and the best in its history. She noted that in connection with the 650th anniversary of the great Azerbaijani poet Imadaddin Nasimi, President Ilham Aliyev declared 2019 the Year of Nasimi in Azerbaijan; therefore, according to the decision of the Organizing Committee, the Festival will be dedicated to Imadedin Nasimi.

"The main purpose of the festival is to strengthen the creative and friendly relations of poets, writers, publishers and readers of Eurasia, create a single Eurasian literary space," said Al. "The year 2019 has been declared by the United Nations as the International Year of Indigenous Languages, and our fourth festival has been included in the program of events. Literature forums, round tables, master classes, exhibitions and presentations, poetry evenings, creative meetings, various events on oriental poetry, classics and modern art and other events will be held within the Festival. We are honored to hold the Festival in Azerbaijan."

"The Pergamon Altar, or altar of Zeus, is a famous work of art from the Hellenistic period, one of the most significant monuments of this time, preserved to our days. It was found 150 years ago and was named after its creation - the city of Pergamum in Asia Minor," said Alexander.

The main theme of the relief images is the battle of the gods with the giants. Currently it is located in the Pergamon Museum in Berlin (Antique collection), built specifically for this purpose, but closed to the public due to the restoration, which will last until 2023.

Varis Yolchuyev spoke about the rules of the festival and the qualifying rounds.

"Holding the Festival in Baku is a significant event in the literary world. The Festival will be attended by 150 writers from 52 countries who will pass the qualifying round by August 15," said Yolchuyev. "The interest for LiFFt is very large, and the Organizing Committee has already received more than 2,000 applications.”

Azerbaijan as a host country will be represented by 30 writers, regardless of regalia and previous successes, who will be selected by the jury. National selection will begin on June 15. The Festival in Baku will be broadcast online via the YouTube channel, he added.

Then Yolchuyev presented a list of writers who will participate in the festival without a preliminary selection. 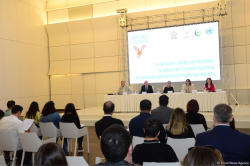