The monument to the prominent conductor of Azerbaijan, maestro Niyazi was ceremonially unveiled in the park situated at the Niyazi Street of Baku.

President lham Aliyev attended the ceremony held to unveil the monument to the great musician, who is the founder of national conductor school.

Today is a very significant day in the life of our country, said President Aliyev addressing the ceremony.

“Niyazi laid the foundation of the Azerbaijani conductor's school, and today his followers delight us with their art. He made a great contribution to the Azerbaijani musical culture, being one of the most famous and talented conductors in the Soviet Union. Niyazi adequately represented Azerbaijan and its people both at the Soviet space and around the world, demonstrating the talent of our people. His conductor's skill is the greatest asset of our nation. Niyazi was the first conductor of almost all the symphonic works of Azerbaijani composers,” the president said, praising the outstanding conductor’s merits.

Azerbaijan is one of those countries, which despite the economic difficulties do not spare funds for the development of culture, said the president.

President Aliyev noted that today the humanitarian sphere including culture, art and literature is one of the main directions of the Azerbaijani state policy.

“In recent years, much work has been done in this direction. Over 20 theaters and museums were reconstructed in our country. Azerbaijan is one of those countries, which despite the economic difficulties do not spare funds for the development of culture. It is because we need this for today and for tomorrow. The states, preserving their culture are worthy of respect, and in addition to this they are making great strides. We are one of such countries,” Ilham Aliyev said.

Azerbaijani state attaches great importance to its cultural heritage, said the president. “Name of Niyazi immortalized in Azerbaijan. His name was given to a symphony orchestra of the Azerbaijan Television and Radio Broadcasting Company, a children's music school, ship, street, and today a grand, beautiful and majestic monument of Niyazi, blending in with the territory is opening,” President Aliyev said.

"We preserve our culture, praising young generation of Azerbaijan, who also play active role in it," said President Aliyev. "Our younger generation is studying contemporary music and at the same time, is committed to the national roots. Festivals, mugham contests with participation of both local and international representatives conducted in Azerbaijan cause huge interest among youth, children and teenagers from all regions, who wish to participate in these competitions in order to show their interest.”

The great composer and outstanding conductor Niyazi Tagizadeh entered the list of unique musicians who have contributed to the golden pages of musical history.

Azerbaijani music culture remembers him as a great master who had the gift of penetrating deeply into compositions of various genres and eras. His glorious pieces enriched national culture, putting it in the ranks of the progressive, trendy music at the time.

Niyazi was born to the family of a famous composer and theatrical figure. The musical atmosphere prevailed in the family naturally had a great influence on Niyazi.

His uncle, prominent composer Uzeyir Hajibeyli, who was also a genius of Azerbaijani classic music, played a huge role in the creative life of the young Niyazi. 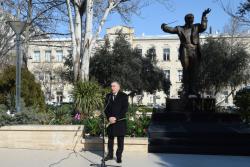