The Turkish Embassy in Azerbaijan hosted a grand reception to mark the Republic Day on October 27.

The event was attended by state and government officials of Azerbaijan, ambassadors of foreign countries, representatives of the public and other guests.

Turkish Ambassador to Azerbaijan Erkan Ozoral first read out the congratulatory letter from the President of Turkey Recep Tayyip Erdogan.

"Turkey has made great strides in the political, military, economic, democratic and human rights spheres and strengthened its position in the region and the world," said the ambassador.

He stressed that mutual visits, numerous documents signed between the two countries provide an opportunity to continue the friendly relations between Azerbaijan and Turkey.

In addition, the envoy noted that that the Republic Day in Turkey will be mournful this year because the Turkish nation experienced a strong shock earlier.

“We overcame a big threat thanks to the people, its support for the head of state, the political will of Turkey’s president,” said the diplomat. “We faced the greatest betrayal throughout the country’s history.”

He also expressed gratitude to Azerbaijan’s government, Azerbaijan’s people led by President Ilham Aliyev and every citizen of Azerbaijan for their support to Turkey.

Ozoral noted that the Azerbaijan-Turkey economic ties are relations built not only in the transportation and energy projects but at the same time, in mutual investments.

Now, Turkey intends to increase the volume of trade turnover with Azerbaijan up to $15 billion by 2023, by increasing investments in the country's economy, he said.

Ozoral added that the volume of Azerbaijani investments in Turkish economy has already exceeded $4 billion.

He also noted that currently, about 2,600 Turkish companies operate in Azerbaijan, and nearly 25,000 people are currently employed by these companies.

On the other hand, Azerbaijan is also taking serious steps, becoming the biggest foreign investor in Turkey, added the envoy.

It is expected that investments of Azerbaijan’s state oil company SOCAR in Turkey’s energy and infrastructure sphere will reach $17-20 billion in the near future, he said, noting that $5.5 billion will be invested in the Star refinery, which is being built in Izmir.

Addressing the ceremony Deputy Prime Minister of Azerbaijan Ali Ahmadov also said that Turkey has passed a long and glorious way through its huge development.

"Relations between our countries have a common history and past. Our relations are an example of a great friendship and fraternity,"  said Ali Ahmadov.

Ahmadov expressed confidence that the unbreakable friendship and fraternal relations which are of strategic nature will continue to be strengthened.

Ahmadov said that Turkey has always faced with huge difficulties and always cope with them with dignity.

“The decisive suppression of a military coup by the people of Turkey was a turning point in the life of the country,” he added.

He underlined that Turkey became even stronger and more determined after the coup attempt. 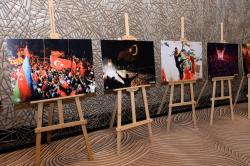