In his speech, Doctor of the Higher School of Practical Studies, researcher at the French National Centre for Scientific Research (CNRS) Karim Ifrak highlighted Nizami's work and the universal ideas in his works, Azertag reported.

Notably, Karim Ifrak wrote the book's chapter on the poet's life and work.

Executive director of the l'Institut Français d'Azerbaïdjan Hakan (Jonathan) Unlu, the head of Lexicology and Stylistics of the French Language Gulnara Sadikhova shared their views on the book.

The speakers stressed that Nizami Ganjavi International Center has published a number of publications in foreign languages ​​to promote Nizami's legacy worldwide.

One of the foreign publications is a book project of 50 ghazals and 50 words of Nizami Ganjavi, translated into French in the 1990s by the late Azerbaijani professor, doctor of philological sciences Ali Musayev.

The editors of the book are prominent French Turkologist, Caucasian scholar Remy Dor and the head of Lexicology and Stylistics of the French Language Gulnara Sadikhova, foreword author is co-chair of the Nizami Ganjavi International Center,Dr. Ismail Serageldin, the author of introduction-founder of the World Verona Poetry Academy Mohamed Nadir Aziza.

The book includes 23 illustrations in the style of modern Azerbaijani miniature by talented artist Parnisa Askarova.

The speakers noted that only a part of Nizami Ganjavi's five works of art included in "Khamsa" ("Khosrov and Shirin", "Leyli and Majnun" and "Seven Beauties" have been translated into French.

The Nizami Ganjavi International Forum will last until November 26.

The forum features panel discussions on multiple topics such as "The influence of Nizami's work on the political and social traditions of the medieval East", "Nizami Ganjavi: a view of the modern world" and others", etc. 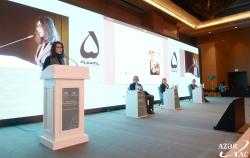