International Women's Day has been celebrated in Azerbaijan.

Officially recognized by the United Nations in 1977, it is a global day honoring women's social, economic, cultural and political achievements.

Since 1917, the day has been marked in Azerbaijan with many large-scale events, gala concerts, festivals and much more.

The project is headed by the director of the State Philharmonic Hall, People's Artist of Azerbaijan Murad Adigozalzade, project coordinator - Ayla Karimova-Zekeriyye.

The musicians thrilled listeners with the music piece composed by Ruzgar Ahmadzade.

Notably, Ruzgar Ahmadzade has recently stunned listeners with the composition " The Return" timed to Azerbaijan's victory in the Second-Karabakh War.

The concert also featured works by Azerbaijani and European composers.  The musicians were accompanied by the State Chamber Orchestra.

The photographs and videos were taken by Kamran Baghirov.

The concert is available on Facebook page of Mugham Center.

Azerbaijan State Art Gallery has hosted a virtual exhibition "Seven Beauties" within the "Year of Nizami Ganjavi" announced in Azerbaijan.

The exposition was timed to International Women's Day - March 8. The exhibition aroused great interest among art lovers and drew attention to the role of women in society. 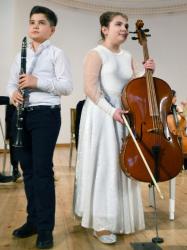