Speaking at the event, the Minister of Culture Abulfas Garayev said that Yugh Theater was founded on October 18, 1989 by Vagif Ibrahimoglu and Hasanaga Turabov at the State National Drama Theater.

The minister added that Yugh has brought new trends to the theater art. Despite his short life, Vagif Ibrahimoglu played a major role in the formation of the modern theater.

He noted that the theater's repertoire is extensive and include plays based on the works of  prominent writers and playwrights.

In conclusion, Abulfas Garayev expressed  his confidence that the theater's team will continue to delight the audience with new projects and productions.

Chairman of the Azerbaijan Theater Workers, director of the State National Drama Theater, People’s Artist Azerpasha Nematov stressed that the event is dedicated to two significant events in the country's theater art. He noted that Yugh takes a special place among the country's theaters.

Next, the audience viewed the fragments from the theater's productions. Together with the spectators,  the actors made a journey into the past and the future, highlighting the iconic years for the theater.

An excerpt from the play "Salam" in the title role with people's artist Fakhraddin Manafov was then presented to the audience. After the presentation, Manafov delivered a speech. He stressed that Vagif Ibrahimoglu opened the doors and let in a number of creative people.

Inviting People's Artist Mehriban Zaki to the stage, Vidadi Hasanov recalled that she performed in the play "Khatun", and Vagif Samedoglu played an important role in her creative life. Mehriban Zaki pleased the audience with a musical work.

During the evening, the theater actors demonstrated various stage productions - comic, dramatic, musical. Together with the audience, they even fantasized about what their theater would be like in 2050.

Vagif Ibrahimoglu is Honored Art Worker, prize winner of Golden Dervish Award.In 1973-1976,  he was an actor of the Azerbaijan State Theater of Young Spectators. From 1976 to 1979, Ibrahimoglu  was the artistic director of the Experimental Theater-Studio at the Azerbaijan Theater Society.

He successfully staged plays in Azerbaijan, Turkey and Estonia. Since 1989, he was the artistic director and chief director of the Yugh theater.

The name of the theater carries a meaning: yugh means "an old rite".The main principle of this avant-garde theater is the relevance of chosen topics, non-standard interpretation of familiar stories and experimenting with new forms. 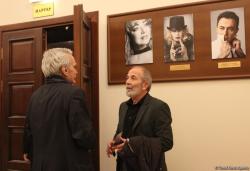