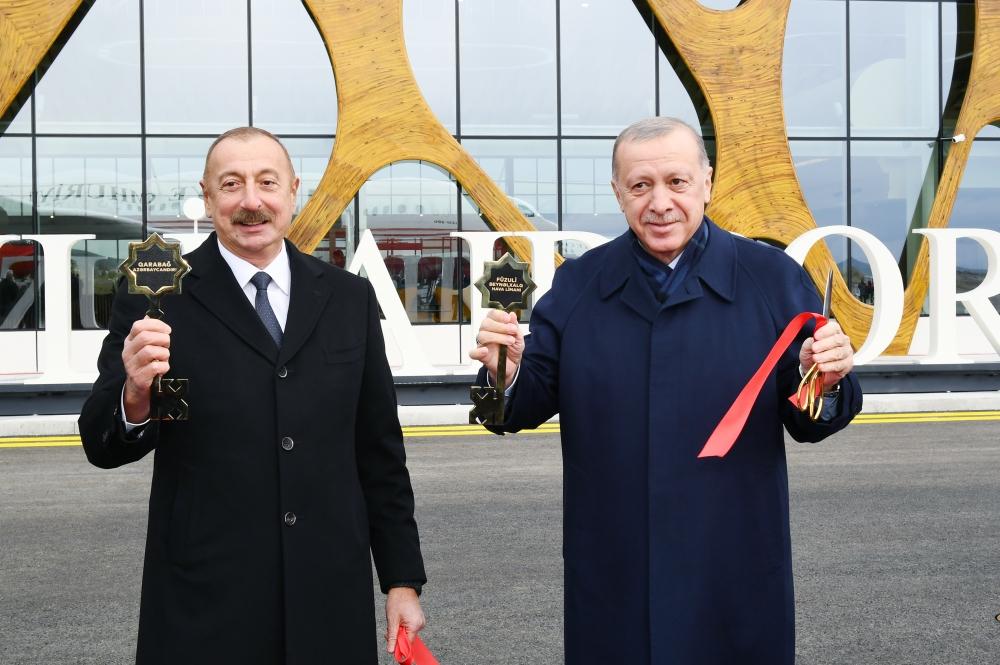 An opening ceremony of the Fuzuli International Airport has been held, Azertag reported on October 26.

The Azerbaijani and Turkish presidents cut the ribbon symbolizing the opening of the airport.

The symbolic keys of the Fuzuli International Airport were handed over to the presidents.

The heads of state viewed conditions created at the airport.

President of AZAL Jahangir Asgarov informed the heads of state of the works done.

It was noted that the Fuzuli International Airport, known as the air gateway to Karabakh, was built at the most modern level. The airport has the capacity to receive any type of aircraft. The runway is 3,000 meters long and 60 meters wide. Equipped with the state-of-the-art infrastructure, the airport's terminal can process at least 200 passengers per hour. All the work done here was carried out in accordance with international norms and standards. Extensive landscaping work has been carried out around the airport. An Air Traffic Control Tower equipped with automated systems has been built. This makes it possible to operate flights from Fuzuli International Airport in accordance with ICAO and IATA standards. Baggage conveyors, registration system, VIP lounges, shops, restaurants and other necessary facilities have been established at the airport. All the criteria for the convenience of passengers have been taken into account.

It was also noted that international airports are also under construction in Zangilan and Lachin, and their construction will further expand the region's transport capabilities.

Then the heads of state were informed about the activities of the Souvenir Production Enterprise to be opened in Jojuq Marjanli. Twenty-five residents of Jojuq Marjanli village will be provided with jobs at the enterprise to be established with the financial support of Jojuq Marjanli Development Foundation, TUIB and TIKA. It will produce gift pottery, small carpets, handicrafts and other products. The state also supported the construction of the plant. The company was established under the auspices of the Small and Medium Business Development Agency. Production equipment was purchased and specialists from Turkey were involved in the organization of production. In addition, 15 greenhouses have been established with the support of TIKA. Lavender and rosemary plants and vegetables will be grown in greenhouses run by 15 families.

The heads of state then had a conversation.

President Ilham Aliyev: Thank you. Take a close-up. My dear brother has given me these beautiful watches. The image of Kharibulbul is also on it.

President Recep Tayyip Erdogan: We have been to Shusha. Shusha is close from here. Kharibulbul is also a symbol of Shusha.

President Ilham Aliyev: Yes, thank you very much, thank you.