President Ilham Aliyev has said that a trilateral meeting of the Azerbaijani, Russian and Armenian leaders in Moscow on January 11 shows that the sides are determined to achieve the result to ensure sustainable and secure development in the region.

Aliyev made the remarks at a joint news conference after the trilateral meeting with his Russian counterpart Vladimir Putin and Armenian Prime Minister Nikol Pashinyan in Moscow on January 11. This is the first meeting among Aliyev, Putin and Pashinyan after the three signed a peace deal on November 10, 2020, to end the 44-day war in Nagorno-Karabakh that lasted from September 27 to November 10, 2020.

“Two months have passed since the ceasefire was declared, and the fact that leaders of the three countries that signed the Statement on 9-10 November are meeting in Moscow today shows that we are determined to achieve the result and draw a line under the events of September and November,” he said.

Aliyev thanked Putin for his initiative to hold the meeting.

“I would like to thank you for this invitation and your initiative to hold this meeting. I share your opinion that the meeting was very important for the further sustainable and secure development of our region,” he added.

The head of state hailed a statement that he signed along with Putin and Pashinyan at the end of the trilateral meeting on January 11 in Moscow.

“The statement signed today testifies to our intentions because one of the clauses of the statement on the results of the cessation of hostilities dealt with the restoration of transport communications. This area can impart great dynamism to the development of the region and strengthen security. The opening of transport communications is in the interests of the peoples of Azerbaijan, Armenia, Russia and our neighbours,” Aliyev said.

He expressed confidence that “neighbouring countries will also extensively join the creation of a diversified network of transport corridors and arteries in our region. We must continue to try to find areas of activity that are effective and result-oriented in the short term”.

Aliyev noted the successful fulfilment of the Karabakh peace deal signed in November 2020.

“In general, I would like to say that the joint statement of 9 November, or 10 November as per Azerbaijani time, is being successfully implemented. Most of the provisions of this Statement have been implemented. The Russian peacekeeping mission is doing its job effectively and there has been no serious cause for concern over the past two months, except for minor incidents. All this gives us confidence that, as Vladimir Vladimirovich [Putin] said, the Nagorno-Karabakh conflict has been consigned to history and we must think about the future, how to live together as neighbours, how to work to open transport arteries and strengthen regional stability and security,” Aliyev added.

He thanked Putin for the invitation, describing the meeting as “very useful and fruitful”.

In turn, Putin thanked at the news conference President Aliyev and Prime Minister Pashinyan for agreeing to discuss the issues related to the implementation of terms of the Karabakh peace deal signed in November.

“We conclude that the terms of this agreement have been generally complied with and no serious incidents have been recorded,” Putin said.

“I consider today's meeting to be very important and useful because we were able to reach an agreement and sign a joint statement on the development of the situation in the region. I am talking about specific steps to establish economic relations and develop infrastructure projects,” he said.

Putin added that for this purpose a working group will be established headed by the Azerbaijani, Armenian and Russian deputy prime ministers. “In the near future, they will set up working expert subgroups and present concrete plans on the development of the transport infrastructure and the economy of the region,” he said.

Russia's peacekeeping group is fulfilling its obligations to both sides.

Putin expressed his confidence that “the implementation of these agreements will benefit both the peoples of Armenia and Azerbaijan, will undoubtedly benefit the region as a whole, and hence the interests of the Russian Federation”.

He noted that Russia’s peacekeeping group is fulfilling its obligations to both sides and that continuous work is being done to restore the infrastructure, energy, residential buildings and social infrastructure in Nagorno-Karabakh.

The statement signed by the Azerbaijani, Russian and Armenian leaders in Moscow on January 11, 2021, consists of four clauses. Under the new statement, a trilateral working group co-chaired by the Azerbaijani, Armenian and Russian deputy prime ministers will be established to implement clause 9 of the November 2020 statement related to the unblocking of all economic and transport communications in the region.

The working group will hold its first meeting before January 30, 2021, to formulate a list of main activity directions arising from the implementation of clause 9 of the November statement, establishing railway and automobile communication as a priority, and also determine other directions as agreed upon among the three leaders.

To implement key activities, the working group co-chairs will approve the composition of expert subgroups for these directions. The subgroups will consist of officials from the Azerbaijani, Armenian and Russian relevant authorities and organizations. The expert subgroups will, within a month of the working group meeting, submit a list of projects specifying the required resources and activities for their implementation and approval at the highest level by the Parties (Azerbaijan, Armenia and Russia). 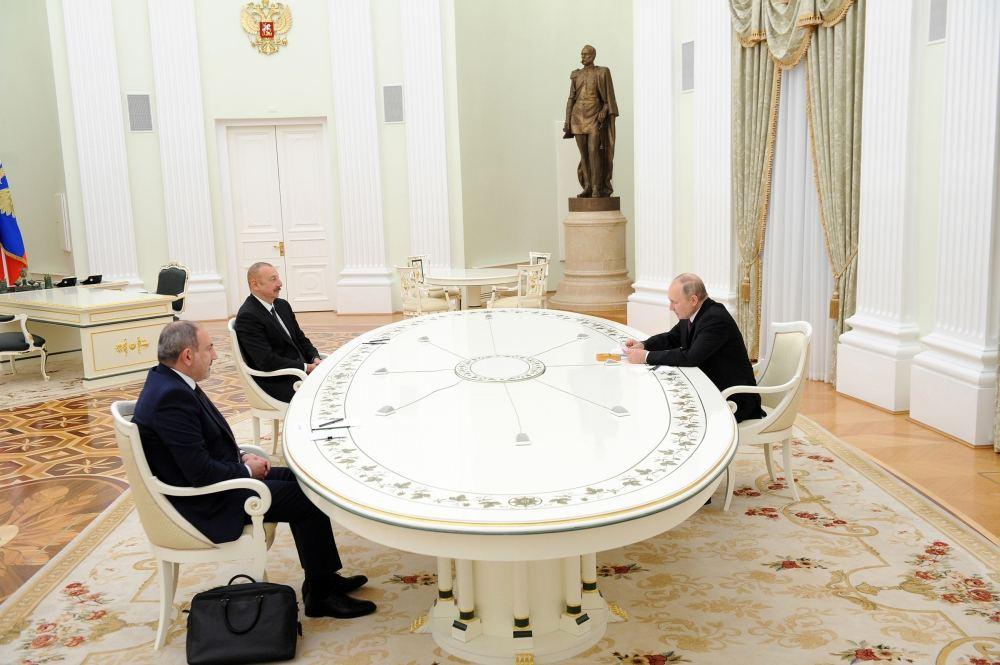