In addition, the minister noted recent Armenian provocations, including July 12-16 military provocation on the Azerbaijan-Armenia border, sabotage reconnaissance group's provocation in August in Goranboy, and the new act of aggression on the September 27 along the frontline.

Moreover, Bayramov informed the ambassador that Armenian armed forces shelled the Azerbaijani positions and villages not only located in the vicinity of the frontline, but also the cities located far beyond it, like Ganja, Mingachevir, Khizi and Absheron.

Additionally, he noted the importance of the implementation of UN Security Council resolutions demanding the full and unconditional withdrawal of the occupying forces from all the occupied territories of Azerbaijan.

In turn, the ambassador noted that the Netherlands is very concerned about the increased tensions in the region, especially on civilian casualties.

She stressed that the Netherlands follows the position of the European Union and calls to the cessation of hostilities.

Additionally, the sides exchanged views on cooperation between Azerbaijan and the Netherlands, where the minister noted the importance of further developing economic relations and stressed the necessity of using full potential in that regard.

The Azerbaijani Army responded by counteroffensive to retake Azerbaijan's occupied territories. So far, a number of strategic heights, Madagiz village, Hadrut town a number of villages have been liberated from the Armenian occupation. 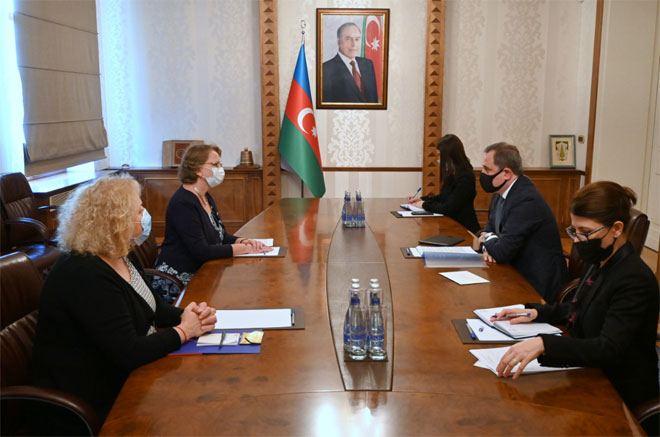