The Bilgah Beach Hotel in Baku has hosted Luxury Awards - the national award ceremony, established by the ABA Event Group.

At the opening ceremony, award winners and guests of the festive evening walked on the red carpet. Besides, an auto show of expensive foreign cars, as well as a concert program with the participation of celebrities and the Ateshgah band were presented to the guests.

Agil Mamiyev and Laman Mirtalibli are the authors of the project.

The prize is awarded for achievements in public life, education, medicine, business, culture, art, sports, the fashion and media industries. 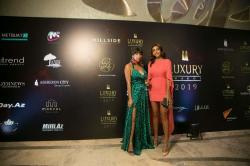