The Turkish Embassy in Azerbaijan has hosted an event timed to Novruz holiday.

The guests enjoyed national sweets and dishes, objects of national applied art and musical instruments of various nations. The event participants familiarized themselves with the traditions of celebrating Novruz in different countries.

Turkish ambassador to Azerbaijan Ercan Ozoral expressed his gratitude to the guests for participating in the festive evening and to Ambassador of Tajikistan to Azerbaijan Rustam Soli for the valuable initiative to hold the event. It was noted that the Novruz holiday unites peoples in the name of peace and prosperity.

The holiday is associated with the arrival of spring, the awakening of nature, a symbol of moral purity, unity and mutual assistance.

Ambassador of Tajikistan Rustam Soli noted the importance of holding an event to further develop ties between peoples and cultures, strengthen friendship and fraternal relations, promote the unique and ancient traditions of Novruz, and wished everyone happiness and prosperity.

UN Resident Coordinator and UNDP Resident Representative in Azerbaijan Ghulam Isakzai stressed that the Novruz holiday brings people joy, bright hopes and peace. It is a symbol of the unity of countries and traditions, represents all the richness of the peoples' customs.

Azerbaijan's Culture Minister Abulfaz Garayev emphasized  that Novruz is one of the most ancient, beloved and cheerful holidays in Azerbaijan, which absorbed the traditional values ​​of the Azerbaijani people is fast approaching.

It was noted that on September 30, 2009, Novruz was included in the UNESCO Representative List of the Intangible Cultural Heritage of Humanity and from this time March 21 has been declared as the International Day of Novruz.

Then the guests took part in the festivities - dances around the traditional Novruz bonfire, watched the performances of art masters, tried national sweets at the tea ceremony. 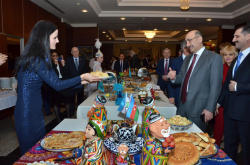