Baku hosted the second meeting of IT ministers of the Economic Cooperation Organization, a regional intergovernmental economic organization promoting sustainable socio-economic development of the Member States on December 5.

While making remarks during the event Ramin Guluzade, Minister of Transport, Communications and High Technologies, said that the penetration level of mobile communication in Azerbaijan is 106 percent and about 80 percent of the country’s population accounts for Internet users.

He noted that Azerbaijan is interested in increasing the turnover of e-commerce, and therefore it is important to carry out joint work on mutual recognition of e-signatures, and this may be stipulated by the relevant agreement among the ECO member states.

“Azerbaijan is currently an initiator and participant of a number of important economic and infrastructure projects, including Baku-Tbilisi-Ceyhan, Baku-Tbilisi-Erzurum pipelines and the Baku-Tbilisi-Kars railway,” he noted. “Azerbaijan is investing in the development of the East-West and the North-South corridors. The work being carried out in Azerbaijan within the framework of the International North-South Transport Corridor project has already been completed. We are closely cooperating with Iran on the Rasht-Astara railway’s construction project, including construction of a new international seaport in the Alyat settlement. This project is very significant in terms of turning Azerbaijan into a major logistics transit hub.”

As for the ICT industry, the Trans-Eurasian Information Super Highway (TASIM) project, which aims to connect the biggest data exchange centers of Europe and Asia, is one of the largest projects in this sphere, the minister said.

“Today we held a meeting of the project’s participants and exchanged views on further steps on the project’s implementation,” the minister said.

Guluzade further noted that the implementation of the project will improve Internet quality and ensure economic development not only in the countries participating in this project, but throughout Eurasia.

The minister said that in recent years a number of successful regional infrastructure projects have been carried out with participation of neighboring countries.

“I would especially like to note the Baku-Tbilisi-Kars (BTK) railway project, which is an important component of the East-West Corridor,” Guluzade said. “As a result of the project’s implementation, the period for delivery of goods from China to Europe decreased by 2-3 times. In addition, a bridge over the Samur River is being built. The bridge is a part of the International North-South Transport Corridor. We believe that all these projects, as well as the TASIM project, along with their impact on trade, tourism and economic development, will help bring together different countries and achieve their sustainable growth.”

The minister also talked about the work carried out for the last year regarding the TASIM project and forthcoming tasks.

“Talking about the work done in 2017, it is worth noting meetings with the embassies of Russia, China, Turkey and Kazakhstan in April to accelerate the negotiations on the project,” the minister noted. “In September, a regular meeting of the working group was held in Almaty city. During the year, we held meetings in various formats, where the TASIM project was discussed, and I am glad that there are no serious disagreements regarding the project among the participating countries.”

TASIM, which is a key infrastructure for the development of Eastern Europe and Central Asia, is expected to give significant contribution in diversifying the routes of Europe-Asia data flow and to improve connectivity in Central Asian landlocked countries.

The project officially proposed in November 2008, during the Azerbaijan International Telecommunication and Information Technologies Exhibition and Conference. When the UN General Assembly adopted the Resolution on Transnational Eurasian Information Super Highway (A/Res/64/186), the project received its first political recognition at global level.

The project is implemented in two stages. During the first stage, key regional operators are expected to build major transit and transport infrastructures within their national territories. In the second stage, TASIM will provide with broadband connection at affordable rates final users in the Eurasian landlocked countries, including Central Asia, by using the new transit infrastructure.

Russia (Rostelecom), Kazakhstan (KazTransCom), Turkey (TurkTelecom) and China (China Telecom) are also involved in TASIM project. Azerbaijan is represented in the project by AzInTelecom Ltd of the Ministry of Communications and High Technologies. 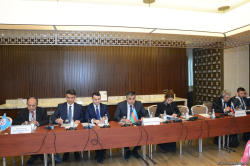