The ceremony of awarding the winners of the 5th Azerbaijan and Baku Championships in Aerobic Gymnastics was held in the National Gymnastics Arena in Baku on Oct. 12, Trend reports.

Among the gymnasts in the age category of "babies" (7-8 years old) as part of the mixed pairs, gymnasts Ayan Gasimova and Mahmud Rustamli ranked first, Zemfira Gasimzade and Arif Mammadzade ranked second, while Ayan Iskandarli and Akbar Mammadli ranked third.

Among the gymnasts in the age category of “pre-juniors” (12-14 years old) as part of the trios, Sanam Kazimova, Sara Alikhanli and Aliya Ismayilova ranked first, while Nazifa Tagiyeva, Melisa Kaysi and Aidan Shirinli ranked second.

Among the gymnasts in the age category of "seniors" (18 years old and older) as part of the trios, Elchin Mammadov, Emil Guliyev and Vladimir Dolmatov ranked first, while Narmina Huseynova, Balakhanim Ahmadova and Medina Mustafayeva ranked second.

The gymnasts involved in aerobic gymnastics demonstrate the exercises in the age categories of "babies", "children", "pre-juniors", "juniors", "seniors" in the individual program, as well as in mixed pairs, trios and groups. 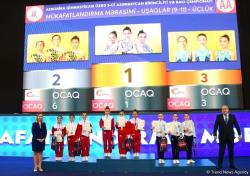