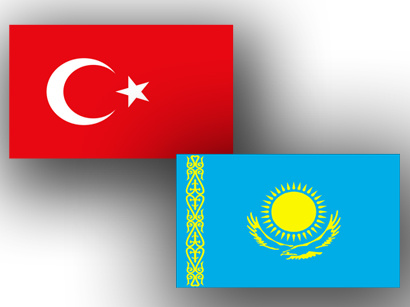 Turkey is one of Kazakhstan's key strategic partners and the ties between the two countries are developing in all areas, Kazakh Prime Minister Askar Mamain told Turkish President Recep Tayyip Erdogan during his official visit to Ankara on November 11.

It was noted during the meeting that bilateral trade between the two countries reached $ 2.3 billion in the first three quarters of 2019, which is 68 percent more than in the same period of 2018.Currently, the pool of investment projects being developed and implemented jointly with the Turkey exceeds $6 billion.

Over 4,200 companies with Turkish capital are registered in Kazakhstan, which are working in the energy, transport, agro-industrial, engineering, infrastructure construction and other areas.

During the negotiations, further development of cooperation in the trade, economic, investment, transport and logistics, agricultural and other fields were discussed.

As part of the visit, Mamin also met with Vice President Fuat Oktay as well as top Turkish entrepreneurs. He attended the 11th meeting of the Kazakh-Turkish Intergovernmental Economic Commission and the opening of a bilateral business forum, Kazakhstan’s Prime Minister’s press service reported.

Together with Fuat Oktay, Mamin participated in the 11th meeting of the Kazakh-Turkish Intergovernmental Economic Commission in Istanbul.

As a result of the event, a Joint Action Plan was adopted. It consists of 65 points in the areas of trade and investment, industry, transport, education, healthcare, tourism and others.

In addition, the sided signed an intergovernmental agreement on international combined transportation of goods, an action protocol for the New Synergy joint economic program for 2019-2021, as well as a memorandum of understanding between Kazakhstan’s Ministry of Trade and Integration and the Turkish Ministry of Trade aimed at developing cooperation on halal products.

Mamin and Oktay opened the Kazakh-Turkish business forum with the participation of about 500 representatives of Turkish and 100 Kazakhstan business circles. Within the framework of the forum, 18 documents for a total amount of $1.5 billion were signed, providing for the implementation of joint projects in infrastructure, industrial, transport and logistics, healthcare, the exchange of experience in public-private partnerships, the development of the financial market, etc.

Since Kazakhstan gained independence, Turkey has invested more than $3 billion in the country. Moreover, Turkey is among the top 10 trade partners of Kazakhstan. Trade turnover between the two countries in 2017 increased by 27 percent and amounted to almost $2 billion.

Turkey ranks second after Russia to establish joint ventures and companies with foreign participation in Kazakhstan. Currently, there are 1,939 such companies, 31 of them are large, 53 are medium and 1,855 are small.

Turkey, Kazakhstan eye to strengthen relations in all spheres: Erdogan