An explosion occurred in the Antalya province in southern Turkey, the Turkish Sabah newspaper reported on October 25.

The report says that the blast occurred in a car park near the building of the Chamber of Commerce and Industry.

Rescue teams and ambulances have been sent to the scene.

As a result of the explosion, there are injured people, the number of which has not been revealed yet, according to the DHA agency. Meanwhile, four cars burnt down. 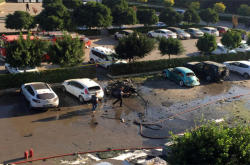 Int'l Khojaly Symposium due in Ankara