Azerbaijan's fighter jet has performed another flight on the last day of the Teknofest-2021 festival held in Istanbul, Turkey, the Defence Ministry has reported.

Prior to the flight, the servicemen paid tribute to the memories of martyrs fallen during the 44-day war between Armenia and Azerbaijan in late 2020.

The complex aerobatic manoeuvres professionally performed by Azerbaijani military pilots over Istanbul city were greeted with great interest of the viewers, the report added.

Teknofest Aerospace and Technology Festival, is the first and only aviation, aerospace, and technology festival of Turkey initially held at Istanbul New Airport in September 2018 by the Turkish Technology Team Foundation (T3) in collaboration with private companies, ministries, and academic institutions. The primary goals of the festival are to raise public awareness about technology in society and to draw attention to the importance of national production.

It should be noted that the Azerbaijani and Turkish Air Forces held the TurAz Falcon - 2021 joint flight and tactical drills on September 1-17.

The exercises were aimed at improving interaction and communication in joint operations between the fighter jets of the two countries, which have different characteristics. 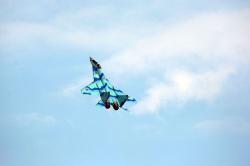