One of the UAVs named "GOZ - N1" weighs 2,5 kg can be used by security personnel and in military industry as well as in geological work.

According to the report, the drone is easy to use and completely modular. Its use in any weather conditions will make it superior to other UAVs. The system and software, specially designed for video and control panel, enables the user to change the camera and control panel depending on the task.

Due to its compactness and ability to fly in any area during emergencies, this drone can be effectively used in various spheres such as rescue operations and for extinguishing fires in hard-to-reach areas.

Another UAV named Istigbal has also been tested successfully. It has been created by a group of Azerbaijani youth within the AzAstro startup project of 14-year-old Hasan Guliyev.

Suad Muradov, Yusif Jafarbayli, Nijat Muradly, and others also took part in the creation of the UAV.

Hasan Guliyev, a member of Azerbaijan's DAVAM youth movement, has told local media that he will further modernize the Istigbal UAV in the future. 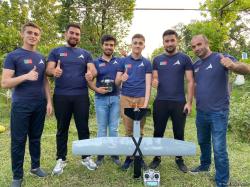