Turkish national team in Euro 2020 Group A has played against Wales at the Baku Olympic Stadium.

The match ended with the victory of the Wales national team with a score of 2: 0.

Three matches are planned to be held in Baku within EURO 2020.

The first match of the group was held in Baku on June 12 between Switzerland and Wales (1:1) result, while Italy beat Turkey, 3:0. Meanwhile,  1/4 final game will take place in Baku on July 3. 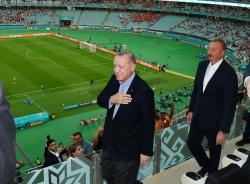