President llham Aliyev has said that Azerbaijan’s territorial integrity must not and will not be the subject of negotiations in the same speech where he said that Baku will liberate its Armenian-occupied territories.

Aliyev made the remarks during the ceremony to grant apartments and cars to the families of martyrs and disabled war veterans in Baku on July 21.

“Azerbaijani people may rest assured that the country’s independence, freedom, welfare of people and strengthening of our country will always be in the center of attention. The settlement of the Armenian-Azerbaijani Nagorno-Karabakh conflict is number one national issue for us…

“This is the national issue. We have to solve this problem in a way that will fully satisfy the people of Azerbaijan. We don’t need and incomplete solution…The sovereignty and territorial integrity of Azerbaijan must be fully ensured. All occupied lands must be liberated without an exception. Azerbaijani citizens must return to all occupied territories, including Shusha. This is my policy, and this is part of my policy,” the president stressed.

Aliyev touched upon the recent military provocation by Armenia in the direction of Tovuz region on the state border, noting that the Armenian army launched a despicable and sudden artillery attack, which resulted in the deaths of several soldiers and a civilian. He stated that necessary measures were taken immediately and retaliatory operation was carried out.

Aliyev reminded that after the military operations, thousands of citizens went to the streets to support the state and the army and celebrate Azerbaijan’s military victory.

“Azerbaijan is a strong state, Azerbaijan has a strong government, which has a strong will and most importantly, the support of the people,” the president said, adding that about 50,000 Azerbaijani citizens, the overwhelming majority of whom are young people, have already applied to the State Service on Mobilization and Recruitment indicating their desire to join the army.

However, he stressed that there is no need to announce mobilization yet.

Furthermore, the president  highlighted the strong international support for Azerbaijan amid Armenia’s cross-border provocation, noting that the first support came from brotherly Turkey. He expressed his gratitude to Turkish President Erdogan for this support.

“I have repeatedly said that today there are no other countries in the world as close to each other as Turkey and Azerbaijan. It is based on history, our shared ethnic roots, and today's politics. At the same time, other high-ranking Turkish officials, including the Minister of Defense, the Minister of Foreign Affairs, members of parliament and public figures, have unequivocally supported Azerbaijan,” he added.

Furthermore, the president emphasized the unconditional support of the Council of Turkic-speaking countries, which include Turkey, Kazakhstan, Kyrgyzstan and Uzbekistan.

Organization of Islamic Cooperation, which brings together 57 countries, has also voiced its support for Azerbaijan over the Nagorno-Karabakh conflict, the president said, adding that Azerbaijan is making every effort to resolve differences between some Islamic countries.

Furthermore, the president spoke about the destruction of Azerbaijani mosques in occupied Agdam, Shusha, reminding that Armenians keep animals in holy Islamic places in occupied territories.

Commenting on Armenian community’s certain potential in some Muslim countries, Aliyev said: “How can they have any kind of relationship or talk about friendship with a country that does such nefarious things? What kind of friendship is this?”

Furthermore, the president reminded that he has signed an order to establish a commission for registering all damaged buildings in the Tovuz region that came under the Armenian attack recently, saying that the country will restore houses damaged in Armenian attacks.

“However, is it possible to restore the lives of people? Is it possible to restore the life of a 76-year-old man? Who did it? Armenia did. Unfortunately, some countries that want to present themselves as friends gave them these shells to kill Azerbaijani soldiers, Azerbaijani citizen, children, elderly, just like in Khojaly. We were not strong back then,” Aliyev said.

The president also reminded that after committing provocation on the Azerbaijani border, the Armenian authorities addressed the Collective Security Treaty Organization (CSTO) demanding them to protect them and to make a statement condemning Azerbaijan.

“They could not achieve that, no statement was made. There was only a general comment on the incident, that’s all. But I must say that 6 countries are members of the CSTO. Three of them supported Azerbaijan through international organizations. Kazakhstan and Kyrgyzstan, members of the CSTO and Cooperation Council of Turkic Speaking States supported us via the Cooperation Council of Turkic Speaking States. Belarus a member of Non-Aligned Movement and supported us by joining the statement of the Non-Aligned Movement,” Aliyev said.

Additionally, he emphasized that today Azerbaijan has gained a great power at international and domestic level, stressing that the settlement of the Armenian- Azerbaijan Nagorno-Karabakh conflict is the country’s number of national issue.

It should be noted that 62 apartments were given to families of martyrs and disabled war veterans on July 21.

Out of these 62 apartments, 42 are for disabled veterans from the Karabakh war, and 20 are for the families of martyrs. All of them are two-room apartments.

To date, the families of martyrs and disabled war veterans have been provided with 8,018 apartments and private houses nationwide.

In 2019, 634 apartments and 300 private houses were provided for citizens of this category.

Moreover, 700 flats and 800 private houses are planned to be provided by the end of 2020. Some 430 apartments have been already provided.

To date, 6,900 cars have been provided to disabled war veterans.

One of the priorities of the state policy in Azerbaijan is to increase the number of benefits and privileges for special categories of people from year to year. Benefits and pensions for families of martyrs and disabled war veterans increased by about 100 percent in April 2019. 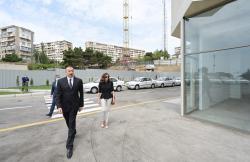