Azerbaijani President Ilham Aliyev has said that his country has duly respondend to Armenia’s deadly provocation on the state border near Tovuz in retaliation to the killing of Azerbaijani servicemen, including a general, and a civilian.

The president made the remarks while addressing the cabinet meeting on results of socio-economic development in first quarter of 2020 on July 15.

The president said that Azerbaijan delivered a crushing blow to Armenian forces in retaliation and shown its superiority.

“According to information available to us, dozens of Armenian servicemen have been killed, a large portion of their support points along the border have been destroyed. In addition, the entire infrastructure of the well-known post, which they used as an excuse, has been destroyed, and this post no longer exists. Enemy equipment, ammunition depots, support points, vehicles, cisterns, and areas where manpower is located have been destroyed by the Azerbaijani Army with precise and accurate fire,” Aliyev said.

The president also said that “Armenian forces were not able to enter the territory of Azerbaijan, not even an inch, and will never succeed," during the cross-border clashes in the past three days.

"On the contrary, if we wanted, today most of the lands in that territory of Armenia could come under our control. But we do not have such a goal.”

Aliyev compared the reatliatory military operations carried by the Azerbaijani Army to battles of April 2016, known as the four-day-war, in which the Azerbaijani army displayed military superiority over the Armenian army on line the line of contact and liberated parts of Aghdara, Fuzuli and Cabrayil regions from occupation.

The cross-border fighting between Armenia and Azerbaijan started on July 12 with Armenia's firing artillery at Azerbaijan's positions in the direction of Tovuz region. Armenian forces have also been shelling villages in Tovuz, killing a civilian. 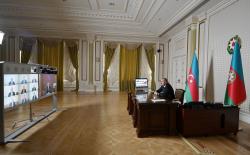