President of the Italian Republic Sergio Mattarella has hosted a state dinner in honor of President of Azerbaijan Ilham Aliyev at the Quirinale Palace in Rome.

Prior to the dinner, the heads of state exchanged keepsakes.

Members of the Azerbaijani and Italian delegations were introduced to President Ilham Aliyev and President Sergio Mattarella, Azerbaijan’s first lady Mehriban Aliyeva and the daughter of the Italian President Laura Mattarella.

The heads of state made speeches at the event.

Speech of President of the Republic of Azerbaijan Ilham Aliyev

Mr. President, first of all, I would like to express my gratitude to you for the invitation to pay a state visit to Italy and for the hospitality extended to me and the delegation.

The relations between Azerbaijan and Italy have a long history. On the rocks in the Gobustan State Historical Reserve, where the petroglyphs included in the UNESCO World Heritage List over 30 millennia old are located, there are inscriptions of the Roman legions in the Latin language dating back to the 1st century BC. These inscriptions confirm that the legions of the Roman Empire were in Azerbaijan. Italian traveler Marco Polo mentioned Azerbaijan in his records. In the 15th century, political and diplomatic relations were established between the Azerbaijani state of Aghqoyunlu and the Venetian Republic. In 1469-1478, the Embassy of the Venetian Republic operated in Azerbaijan. At that time, there were contacts between Azerbaijan and the Kingdom of Naples. During the existence of the Azerbaijan Democratic Republic, which was the first parliamentary republic in the Muslim world in 1918-1920, diplomatic relations were established between Azerbaijan and Italy. A diplomatic mission of Italy functioned in Baku. In 1972, the capital of Azerbaijan, Baku, and the Italian city of Naples were declared twin cities. Currently, cooperation between Azerbaijan and Italy is successfully developing in all areas.

Mr. President, we had a very fruitful meeting today. The issues discussed during the meeting confirm the strategic essence of the relations between the two countries. During the state visit, more than 20 documents are to be signed. Among them, I would like to emphasize the “Joint Declaration on Strengthening the Multidimensional Strategic Partnership” between Azerbaijan and Italy. This document will take our relationship to an even higher level. The “Joint Declaration on Strengthening the Multidimensional Strategic Partnership” once again confirms the support of Azerbaijan and Italy for independence, sovereignty, territorial integrity and internationally recognized borders of each other. The document also reflects an unequivocal position on the settlement of the Armenia-Azerbaijan Nagorno-Karabakh conflict based on these principles. These principles are consistent with the resolutions adopted by the UN Security Council in relation to the Armenia-Azerbaijan Nagorno-Karabakh conflict requiring the withdrawal of aggressive Armenia from all occupied territories of Azerbaijan. For many years, Armenia has occupied the territory of Azerbaijan and conducted ethnic cleansing. More than a million of our compatriots have become refugees and internally displaced persons. The conflict should be resolved within the framework of the territorial integrity of Azerbaijan in accordance with the norms and principles of international law.

Our mutually beneficial cooperation in the economic sphere is continuously expanding. Our trade turnover is at a high level. Italy is Azerbaijan’s number one partner in the field of trade and export. The total volume of our trade with Italy in 2019 exceeded $6 billion. Azerbaijan accounts for 92 percent of Italy’s trade with countries of the South Caucasus. For many years, Azerbaijan has been supplying crude oil to Italian consumers, which accounts for 17 percent of the oil consumed in Italy. Last year, Azerbaijan was the biggest supplier of crude oil to Italy. Azerbaijan closely cooperates with Italy in the implementation of one of the largest infrastructure projects in Europe – the Southern Gas Corridor, which is being implemented on the initiative of Azerbaijan. The implementation of TAP, the last segment of the Southern Gas Corridor, is nearing completion .

Our relations in the field of culture are developing successfully. In 2012, the statue of great Azerbaijani poet Nizami Ganjavi was unveiled in the famous Villa Borghese park in Rome. Currently, there is training in the specialization of translation into Italian at the Azerbaijan University of Languages. A Center of Italian Language is in operation. Italy is one of the main countries of Europe where Azerbaijani students are receiving education.

Italy is the cradle of ancient civilization. Azerbaijan is very fond of Italian culture, art and cinema. A large number of Azerbaijani tourists visit Italy every year. Over the past three years, the number of visitors from Italy to our country has increased by more than 40 percent.

Dear Mr. President and dear Mrs. Laura Mattarella, I wish your country and the friendly people of Italy well-being, development and progress! 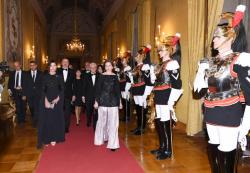