The Defense Minister of Azerbaijan, Colonel General Zakir Hasanov has met with Guo Min, the newly appointed Ambassador of China.

Hasanov congratulated the ambassador on the commencement of diplomatic activity in Azerbaijan and wished her success in expanding cooperation between Azerbaijan and China.

Noting that military cooperation between Azerbaijan and China is developing in the same way as in other areas, Hasanov expressed confidence in its future continuation.

In turn, Guo Min expressed satisfaction with the beginning of diplomatic activity in Azerbaijan. She stressed that she would make every effort to develop Azerbaijani-Chinese relations, in particular, cooperation in the military field.

During the meeting, the sides discussed issues of cooperation between the two countries in the military, military-technical, military-educational and other fields, as well as the organization of a mutual visit of specialist groups.

On April 27, 2018, the defense ministries of the two countries signed a document on military assistance.

China supports the resolution of the Nagorno-Karabakh conflict in accordance with the norms and principles of international law within the framework of the territorial integrity of Azerbaijan.

Despite the remoteness of China and Azerbaijan from a geographical point of view, there have been friendly relations between the peoples of the two countries. The historical Silk Road plays an important role in creating these relations.

Azerbaijan is an important country along the Silk Road route and actively supports and participates in the initiative to jointly build the Belt and Road project.

In April 2015, Azerbaijan became the founding country of the Asian Infrastructure Investment Bank, and in July, the dialogue partner of the Shanghai Cooperation Organization.

In December 2015, during the visit of President Ilham Aliyev to China, the parties signed a memorandum of understanding on the joint construction of the Silk Road economic belt. The document gave a new impetus to the development of Chinese-Azerbaijani economic and trade relations.

The two countries are ready to deepen comprehensive cooperation within the framework of the Belt and Road initiative and to make a proper contribution to the development of countries along the Silk Road. 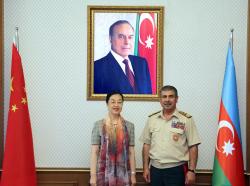