Hasanov said that cooperation between the two countries is based on friendship and mutual trust, adding that the relations are constantly developing.

As for the military-political situation in the region, Hasanov stressed that the Armenia-Azerbaijan Nagorno-Karabakh conflict poses a major threat to regional stability and it is necessary to achieve the conflict settlement within the norms of international law.

Gerasimov recalled that the relations between the two countries are based on historical roots.

“Russia is an important partner of Azerbaijan,” he added.

Gerasimov once again stressed the need of organizing and holding mutual meetings with senior military officials in terms of expanding cooperation in military and military-technical spheres.

Then the sides discussed the current state of cooperation in the military sphere and exchanged views on other regional issues of mutual interest.

In conclusion, Gerasimov thanked for organizing a bilateral meeting with Chairman of the Joint Chiefs of Staff of the US Department of Defense Joseph Dunford in Baku and expressed his gratitude to the Azerbaijani leadership for the hospitality. 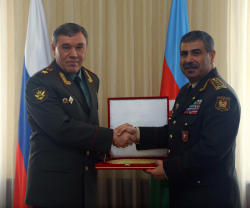