The Azerbaijani Interior Ministry press service's Barda regional group has said that security measures are being strengthened on Azerbaijani territories, which were liberated from the Armenian occupation during the 44-day war between September 27 and November 10.

Officers of the Barda regional police department and servicemen from the Internal Troops continue their service activities on the territory of Khojavand region. Service posts have been set on the territory of the region and security is fully controlled, the report added.

The Azerbaijani State Security Service and the Defence Ministry said in a joint statement on December 13 that the security agency was forced to conduct an anti-terrorist operation in Hadrut as the Armenian armed groups had not left the territory, had created combat positions and had committed acts of terror and sabotage against Azerbaijani civilians and servicemen in the area.

Later, the Azerbaijani Foreign Ministry issued a statement urging Yerevan to strictly adhere to the trilateral peace statement signed by the Azerbaijani, Russian and Armenian leaders on November 10, 2020 to stop the Nagorno-Karabakh war. 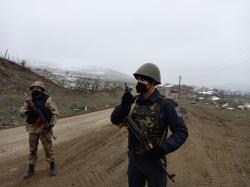