Baku Music Academy (BMA) has hosted an event dedicated to Remembrance Day in Azerbaijan for honoring and mourning servicemen who sacrificed their lives for the country's territorial integrity and sovereignty during the Second Karabakh War in 2020.

Established under President Ilham Aliyev's decree, Remembrance Day is held in Azerbaijan on September 27, the day when the war with Armenia broke out.

At the opening ceremony, the memory of the martyrs was honored with a minute of silence.

The heroes of the second Karabakh war shared their memories and spoke about the glorious combat path, the courage of the Azerbaijani soldiers who became martyrs as well as veterans, who liberated the territories of Azerbaijan from the Armenian occupants.

Participant of the battles for the liberation of Jabrayil and Khojavand regions, laureate of republican and international competitions, ex-soloist of the Bolshoi Theater's Youth Opera program, the soloist of the San Carlo Theater's youth troupe Atash Garayev performed a music piece " Shahidlik Zirvasi" to the music of Ph.D. in art history Konul Huseynova, and to the words of national poet Vahid Aziz.

The music piece was dedicated to the memory of martyr Ulvi Hajiyev.

The performances were greeted with applause from the guests of the evening. 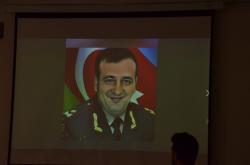