The memorandum focuses on development of culinary and confectionery art and popularization of traditional cuisine. Multiple culinary projects will be implemented within trial cooperation, Trend Life reported.

The document was signed at the 3rd Culinary Championship in Ukraine.

Chairman of Azerbaijan Chefs Guild Ilkin Akberzade was included in the international jury of the competition, along with representatives of Ukraine, Belarus and Italy.

Professional and novice chefs competed in 13 nominations, but the title of "Golden Chef-2021" was not awarded to anyone. In this regard, next year, the participants of the competition will be able not only to win the right to be called the "Golden Chef of Ukraine", but also to receive monetary rewards in an increased amount.

Sessions of the chefs " World Cuisines" was held as part of the culinary championship.

The 3rd Culinary Championship in Ukraine also featured Ukrainian Rest Day, aimed at developing the restaurant business, with the participation of the country's leading speakers and restaurateurs.

Earlier.Chairman of the Azerbaijan Chefs Guild Ilkin Akberzade has been invited as a  jury member to Expo Culinaire 2021 in Dubai.

A number of events, including master classes, exhibitions, competitions for chefs, cooks, bakers, pastry chefs, etc. were held in virtually amid coronavirus pandemic.

The festival's guests enjoyed various kinds of shakarbura, pakhlava and much more. 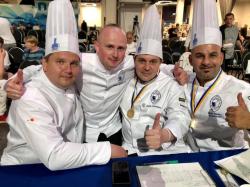