The award was presented for successful research activities in the preservation and development of the Azerbaijani national costume, the promotion of national and spiritual values, active social activities, etc.

In different years, this prize was awarded for many Azerbaijani cultural figures, including the director of the National Art Museum  Chingiz Farzaliev, director of the State Academic National Drama Theater Israfil Israfilov, famous playwright, Agshin Babayev, Secretary of Azerbaijan Composers Union Zemfira Gafarova and others.

In 2014-2015 she worked as a teacher at the State Academy of Fine Arts. Since 2017, she is teaching at  Khazar University. The designer also heads the Women's Entrepreneurship Development Association. 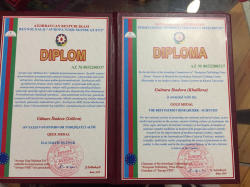