Azerbaijan State Theater of Young Spectators has hosted an evening devoted to the beginning of the 91st theater season of the theater’s troupe.

Theater director Naida Ismayilzade talked about the theater’s future plans and wished the team success. She noted that the state pays special attention and care to the development of culture and art, the theater sphere.

Ismayilzade said that as many as eight premieres were presented in 2018, which were received with great interest of the audience.

She added that in the new season, work on four premieres is already underway and all conditions for fruitful work have been created for the creative team.

"One of the most important tasks is to stimulate the activity of talented youth. Therefore, we decided to begin the new season with an award ceremony for our young actors and friends of the theater," Ismayilzade emphasized.

She mentioned that at the end of the season, new awards named after Yusif Valiyev and Firangiz Sharifova will also be awarded.

The chief director of the theater, Honored Art Worker Bahram Osmanov and the head of the press service Parvin Nuraliyeva handed honorary diplomas.

Sevda Aliyeva was awarded as "The most active spectator," SOCAR and Medeniyyet TV – as "Friend of the theater," and director of the troupe Alasgar Muradkhanli received the award "For loyalty to the profession". 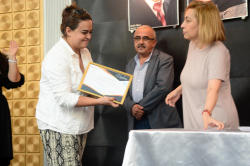 Theater of Young Spectators to mark the 90th anniversary