For the first time in Baku, Red Bull Dance Your Style international dance competition was held in the park of the Heydar Aliyev Center on August 25.

There was no jury at the competition – the audience itself was choosing the best performances.

The event guests enjoyed the performance of DJ Tim, who in 2018 represented Azerbaijan in Poland at the Red Bull music competition.

Murad Arif was the host of the event, while singer Rauf was invited as the special guest.

Red Bull Dance Your Style is a dance competition bringing together performers representing various styles of street dances. In 2019, Dance Your Style had more than 50 events in over 30 countries.

The World Final will be held in Paris on October 12, where all the winners will come together to crown the first ever Red Bull Dance Your Style World Champion. The winner from Azerbaijan, Rayman, will get a chance to fight for the title against the best dancers in the world.

Red Bull Dance Your Style is a battle concept where the emphasis is put on bringing people together in a celebration of dance, music and performance, and on recreating the social, party atmosphere and vibe that all the street dance styles were derived from.

The competition itself is a mixed, all-style solo (one-on-one) battle, in which dancers from any street style discipline can participate.

This open entry, all-styles format means that each battle is an exchange of the diverse and different number of styles that exist in street dance. Audiences get to see breaking, hip-hop, popping, house, locking and other street-dance styles. The dancers go head-to-head against one another, just like at parties back in the day.

When it comes to the music that the dancers battle to, the DJs spin well-known commercial tracks for each round, randomly selecting different genres to test the dancer’s ability to perform and adapt their dance styles to the rhythm of the beat. This means that competitors have to be ready to get down to anything from funk to pop music, rap to garage, old-school classics to recent chart hits and other genres of popular music.

Red Bull Dance Your Style is all about getting down to the type of music that audiences know and love. 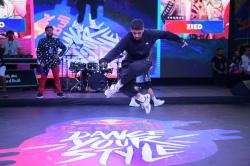