Established almost 40 years ago by its artistic director, Professor Tarlan Seyidov, the Children's Musical Theater is growing, while remaining loyal to its traditions.

Over the past years, the theater's repertoire has been enriched with new performances.

Now it includes the highly acclaimed "Bremen Town Musicians", the almost serious mini-opera "Iskandar and Shepherd", and the musical-historical journey "I love you, Khazar" as well as an ultra-modern musical revue "When the Stars come Down on Us".

This time the creative team turned to classics - the immortal and much admired story "Buratino" by Alexei Tolstoy and the wonderful music by composer Alexei Rybnikov.

Unlike past performances, this time children not only dance and sing live, but also try themselves in the new genre of Comedy del Arte.

More than 20 students from primary school, high-school and college will take part in the play. All little artists received acting training in theatrical studio.

The producer is Elvin Mirzoyev.

The event starts at 19:00.Admission is free. 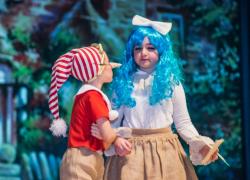