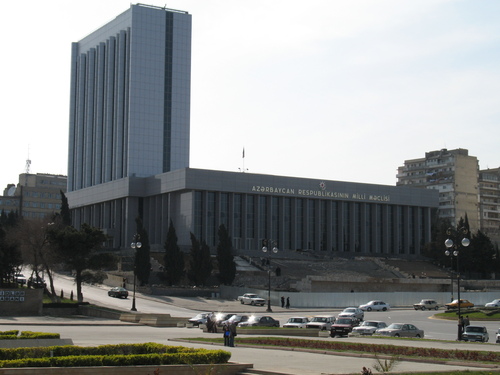 Despite the global financial crisis, the main indicators and objectives of Azerbaijan's state budget for 2012 were successfully implemented, a senior lawmaker was quoted by Trend news agency as saying.

The remarks by Ziyad Samadzade, chairman of the Azerbaijani parliament's economic policy committee, came as the committee was discussing the draft law on the execution of last year's budget.

"The successful execution of the budget speaks volumes about the harmony of the economic life of the country," Samadzade said.

Finance Minister Samir Sharifov said in his speech at the meeting that the successful execution of the 2012 state budget has created the conditions for maintaining macroeconomic stability, increasing incomes and improving the economic power of the state. According to him, the rate of income growth is several times higher than the rate of inflation.

The minister also noted that according to the results of 2012, other incomes of the state budget amounted to 143 million manats (with growth by 1.6 times).

In 2012, within the implementation of the state budget, stable financing of all envisioned projects, in particular, financing of social conditions of citizens - pensions, salaries, allowances, etc. -- was carried out, Sharifov said.

Sharifov also said the budget expenditure was implemented by 98.6 percent or in the amount of 17.417 billion manats, which is 2.019 billion manats (or 13.1 percent) more compared to the indicators posted in 2011.

According to Sharifov, in 2012, Azerbaijan spent 1 billion manats from the attracted funds on the implementation of road construction, water and social infrastructure and other projects.

"Azerbaijan has shifted to a new principle of financing investment projects through the state budget. The new principle provides for joint financing of investment projects with international finance and credit organizations, which envisages the provision of a part of funds for their financing through the state budget and another part - through international financial institutions," Sharifov said.

According to him, 300 million manats derived from the Reserve Fund of the State Budget of Azerbaijan were allocated for the implementation of several projects of social purposes.

"These funds were allotted for the improvement of cities and regions of the country, construction of roads between villages and other projects of social significance. According to the results of 2012, 838 million manats from the Reserve Fund of the State Budget were spent on unplanned projects," Sharifov said.

Sharifov also said the amount of the state budget deficit is only 0.3 percent of the GDP -- 1.1 percent below the forecast.

According to him, as of January 1, 2013, residue in the single treasury account amounted to 465 million manats, which is planned to be spent on the possible budget deficit of 2013 as well as the expenditure on covering state debt.

It was earlier reported that the budget income for 2013 was predicted at 20.729 billion manats while expenditure - at 24.5 billion manats.

Speaking at the parliamentary committee meeting, chairman of the Chamber of Accounts Heydar Asadov said that the chamber considers the 2012 budget as successfully implemented.

According to him, as a result of implementing proper economic policy and while expecting another recession in the world economy, Azerbaijan was able to maintain the stability of its economy in 2012.

While in previous years failures on some points were observed when considering the implementation of the budget, in 2012 this was not the case.

"The state budget of Azerbaijan in 2012 was implemented by 98.6 percent, which is the highest indicator in recent years, while the implementation of the budget by 100 percent is absurd. Furthermore, last year 64 million manats were saved through wages and 59 million manats - through the purchase of goods and services and other spending," Asadov said.

Asadov went on to say that 2012 was remembered with the implementation of all planned social projects as well as the compensation of the Soviet-era deposits of the population.

The draft law on the execution of last year's budget was recommended for consideration at the plenary session of the Milli Mejlis and will be submitted for discussion on May 31.