Azerbaijan and Iraq have discussed prospects for bilateral cooperation in transport, communications and other spheres at the meeting between Transport, Communications and High Technologies Minister Rashad Nabiyev with a visiting Iraqi parliamentary delegation.

At the meeting, the parties focused on the opportunities for Iraq to benefit from Azerbaijan’s experience in various fields.

Moreover, the sides also exchanged views on the joint work to organize the next meeting of the Joint Commission on trade, economic, scientific, and cultural cooperation between the governments of the two countries.

They also discussed the expansion of the legal framework between the two countries and the issues regarding air transport. 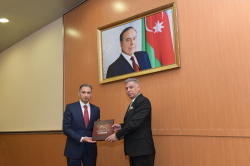