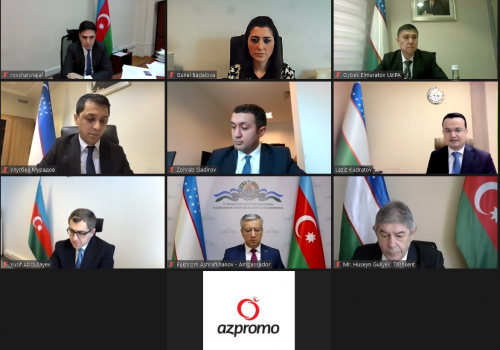 Organized by Azerbaijan Export and Investment Promotion Foundation (AZPROMO) under the Economy Ministry, the forum was attended by officials from both countries and over 100 representatives of companies working in construction, industry, agriculture and other fields.

During the online forum, Azerbaijan’s Deputy Economy Minister Rovshan Najaf noted that Azerbaijan-Uzbekistan political relations, based on the principles of friendship, laid the foundation for the development of trade and economic cooperation.

Najaf noted that such events will have a positive impact on stimulating business initiatives, expanding cooperation between the business communities and building new ties.

Uzbek businessmen were invited to take advantage of the favourable economic environment created in Azerbaijan.

Uzbekistan First Deputy Minister of Investment and Foreign Trade Laziz Kudratov emphasized his country’s interest in developing cooperation with Azerbaijan and shared his views on new directions of economic cooperation.

Additionally, the participants discussed the topics of expanding ties, implementation of joint projects, export and investment potential of the two countries, business and investment climate.

It should be noted that the trade turnover between the two countries amounted to $82.3 million in 2020. Of the total turnover, the export of Azerbaijani products to Uzbekistan amounted to $23.1 million, while import to $59.1 million.

Trade turnover with Uzbekistan up by 13 pct in 2020