The European Commission has allocated 1 million euros as part of technical assistance for the further development of the Baku International Sea Trade Port.

Director General for Mobility and Transport of the European Commission, Henrik Hololei told reporters during his visit to the Baku International Sea Trade Port in Alat settlement.

Hololei stressed that first of all, he thinks that Azerbaijani people can be proud of the development in their country. He expressed support for the concept started by Azerbaijan to become a regional transit and logistics hub.

In order to create a successful hub, multimodal transportation systems are necessary, he said, adding that the commissioning of the Baku-Tbilisi-Kars (BTK) railway became an important step for Azerbaijan.

Hololei said that during his visit he saw that Azerbaijan has ambitious plans and expressed confidence that these plans will be implemented thanks to the correct use of the advantageous geographical location of the country and the determination to create a well-functioning transport system in order to become an important regional hub.

The Director General stressed that he had interesting discussions with Taleh Ziyadov is Director-General of Baku International Sea Trade Port, adding that they already met in January in Brussels.

He went on to say that they also discussed phases of the port’s development, adding that the first phase will be completed this year.

The port’s development project is very important for Azerbaijan, the region and the entire Eurasian space, said Hololei. He noted that the Baku port plays a very important role for connecting Asia and Europe.

The port will facilitate the traffic flow between these two different regions, because it is geographically well located, he said.

Activity of the port, the BTK railway will make it possible to shorten the cargo delivery time by about two weeks, and for the logistics and transportation sphere, this means saving money, he added.

This is also an important alternative route, because the EU is interested in diversification of routes from Europe to Asia and back, as this creates additional opportunities in transport and logistics sphere, according to him.

The Port is expected to become one of the leading trade and logistics hubs of Eurasia. The implementation of all 3 phases of construction is projected to increase the capacity up to 7,660 tons on a daily basis. 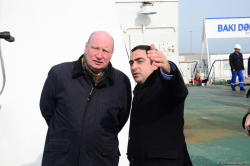