The fifth Eco-scout camp has been successfully held in Lankaran.

The three-day camp took place in one of the region's unique protected areas -Hirkan National Park.

Founded in 2004, Hirkan National Park  is rich in plant species. The vegetation cover is mainly represented by trees and shrubs that form forests here.

During the camp, participants were given a lecture about the extraordinary wilderness of the national park and the rare leopard that inhabits deep forests of the park.

Campers also took a trail to the marvelous Khanbulan lake, where they engaged in first aid, hiking, archery, orienteering, and various other sports adventures.

The youth were informed about Hirkan National Park, in particular, about the leopards found there.

Young people also discussed global environmental problems as part of the training "From Waste to Art".

In conclusion, all participants of the camp were awarded certificates.

The first camp within the Eco-Scout project was held in May this year at Shirvan National Park. 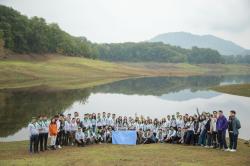