President Aliyev says Azerbaijan is in its most independent, strong period [PHOTO] President Ilham Aliyev has said that Azerbaijan is living its strongest and most independent time in its history.

Aliyev made the remarks while inaugurating an Olympic Sports Complex in the Tartar region of Azerbaijan on June 3.

“Every visitor to Azerbaijan - if he is impartial - witnesses the development of our country, the well-being of our people, the stability that prevails in the country. He sees that today the modern and independent Azerbaijani state is at the highest peak. I can say with full confidence that Azerbaijan has never been so strong, so independent and free in history,” the president said.

“As you know, the construction of sports facilities in the regions of Azerbaijan is widespread. I think that Azerbaijan is one of the leaders in the world on this parameter”, Aliyev noted.

The president reminded that the number of Olympic complexes built in the country's regions has already reached 46. The construction of Olympic Sports Complexes is underway in 5 regions and Azerbaijan will have 51 sports complexes in the regions, Aliyev said.

“This will allow regional athletes to increase their professionalism. There are all conditions - a large game room, wrestling, boxing, gyms, swimming pool. There is even a hotel. There has never been a swimming pool in Tartar. A large stadium was built. The stadium has never been. It is possible to engage in playing mini-football, volleyball, that is, most sports here”, the president added.

Aliyev stressed that in general, the sports infrastructure of the country allows holding any international competition. In this regard, he underlined the fact that two major international sports competitions have already been held in Baku.

He reminded Azerbaijan’s holding of the European Games in 2015, which is “the second largest game after the Summer Olympics.”

He stressed that hosting the European Games and the IV Islamic Solidarity Games in Azerbaijan has strengthened the country’s sports potential, and at the same time presented Azerbaijan as a modern country in the world. In addition, Aliyev noted that more than 10,000 athletes and thousands of guests from more than 100 countries took part in the European and Islamic Solidarity Games.

“I am sure that each of them left Azerbaijan with the best impressions”, he said.

Aliyev stressed that the main purpose of sports events is to ensure people’s health.

He noted that thus, by ensuring the popularity of sports, Azerbaijan will protect the health of the people, and the country’s youth, the younger generation, will be healthy - both physically and mentally.

Aliyev reminded his initiative that gives access to free check up for every Azerbaijani citizen once a year, adding that all cities in the country have been provided with modern hospitals for this purpose. He said that more than 5 million people have been screened free of charge each year to determine their physical condition and received appropriate treatment if diagnosed.

“Thus, as a result of these and other measures, life expectancy has increased in Azerbaijan. The people of Azerbaijan are now healthier, and both medical examinations and sports - these two factors, I think, play a key role in human health. Of course, we should try to get our children and teenagers involved in sports on a regular basis”, he added.

He further spoke about the development of Tartar region.

“Tartar region has a special place on the map of Azerbaijan. Tartar region is located in the frontline, and, of course, attention to this region has always been high. It is no coincidence that a lot has been done in recent years for the socio-economic development of the Tartar region”, Aliyev said.

Noting that it is his sixth visit to the region, he said that every time he takes part in the openings gets acquainted with the situation, gives relevant instructions so that works can be fulfilled faster.

“I can say that the infrastructure of the region has been developing very fast in recent years. The new substation, which will open today, will play an important role in supplying Tartar with electricity. However, as a result of the measures taken so far, great progress has been made in this area”, the president added.

Aliyev reminded that there used to be problems with electricity supply in Tartar before and that this problem has been resolved.

He stressed that the new electricity substations opened during this visit, will create additional opportunities for both the Tartar region and neighbouring regions.

Aliyev also reminded that gasification in Tartar reaches 98 per cent.

“About 10 years ago, there was no gasification at all. Not only in the villages, but in the city there was no gas. Now, gas pipelines have been laid to most villages, and, of course, 98 per cent shows that special attention is paid to this work,” he added.

Furthermore, the president noted that the road sector is being completely renewed. “Today we inaugurated the opening of a new road, and the presentation reflected the previous state of that road. There was no asphalt, there were impassable dirt roads in autumn and winter”, he said.

The president also highlighted the fact that 80 per cent of the roads have been overhauled and will be 100 per cent after the implementation of one project.

“Thus, the issues related to major infrastructure projects - electricity, gas and roads - have been resolved. Social infrastructure, a beautiful Olympic Sports Complex has been created, the district central hospital has been overhauled a few years ago and the stat-of-the-art equipment has been installed. The water and sewerage project in Tartar was completed four years ago, and we celebrated its opening with my participation. Currently, drinking water and irrigation projects are being implemented”.

The president emphasized that as a result of drilling subartesian wells alone, the region's water supply has significantly improved. He also said that 72 subartesian wells have been drilled so far. “The new decree envisages drilling 21 additional artesian wells. Thus, the problems related to irrigation in the Tartar region will be resolved, which, of course, will serve the development of agriculture”, he added.

“Grain growing and cotton-growing are traditional agricultural areas for Tartar. As for cotton, productivity in Tartar is higher than the national average”, Aliyev said.

The president said that 34 metric centners of cotton were taken from each hectare. This figure is also at a good level in the country, 29 metric centners. “But Tartar is in the forefront here”, he added.

Reminding that Armenia has cut off water to Tartar, Aliyev described this “environmental terrorism”. 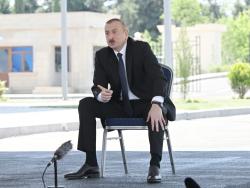