In his remarks, Heydar Aliyev Palace director Ramil Gasimov stressed the importance of the traditional meetings with the heads of a number of major concert halls and musical groups.

He emphasized that relations between Azerbaijan and Turkey, based on historical friendship, common language, religion, culture and traditions as well as cooperation at a high level, are constantly strengthening.

Ramil Gasimov expressed confidence that after the end of the pandemic, the joint projects of the Heydar Aliyev Palace and the Bilkent Symphony Orchestra will contribute to strengthening and entering a new stage of the cultural ties.

Moreover, the Heydar Aliyev Palace has recently launched project "The Artist Today" aimed at showing patriotic spirit through paintings and the growth of young and talented artists.

The first participants in the project were art faculty students of the Azerbaijan State University of Culture and Art.

Young artists brilliantly reflected the courage and patriotic spirit of the National Army. In their works, the artists showed the heroism of martyrs and soldiers of the 2020 Nagorno-Karabakh War.

After the end of the coronavirus pandemic, this project will be implemented on a larger scale. Multiple exhibitions of young artists will be organized as part of the project.

The Heydar Aliyev Palace also carries out new project "From the Treasury of Nizami" to mark the 880th anniversary of eminent genius poet and thinker Nizami Ganjavi and the Year of Nizami Ganjavi in ​​Azerbaijan.

The project will feature contemporary romances by young composers to the words of Nizami, musical theatrical performances from the poem "Treasury of Mysteries", ballet performances, various competitions and much more.

Since 1994 the orchestra is based at the Bilkent Concert Hall. The BSO is UNICEF Turkey Goodwill Ambassador since 2009.

Turkish and foreign artists, continuing their postgraduate studies at the Institute of Music and Performing Arts, also participate in concerts to further expand the orchestra. All this makes the BSO is the first private, international and academic, artistic ensemble in Turkey. 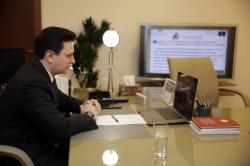