Gobustan plunges its visitors into atmosphere of prehistoric times [PHOTO/VIDEO] Gobustan State Historical-Artistic Reserve has plunged its visitors into the atmosphere of prehistoric times.

The theatrical show "Gobustan - Stone chronicle" left no one indifferent. The project reflects the life of prehistoric men. All the first people lived in common dwellings as it was easier to survive, hunt, fight with other tribes. In a community, they could transfer experience from older generations to younger ones.

For many centuries, numerous skills and knowledge have been passed down from generation to generation.

The main goal of the project is to promote the ancient history of Azerbaijan and Gobustan.

The event was organized by the Ministry of Youth and Sports with the support of the Gobustan State Reserve.

The rock paintings dating back to 8 millenniums reflect different hunting scenes, ceremonial and ritual processes of the habitants of these places. Gobustan petroglyphs were repeatedly investigated by famous Norwegian explorer and adventurer Thor Heyerdahl, who recognized local boats petroglyphs as the oldest known images of pirogue in the world. 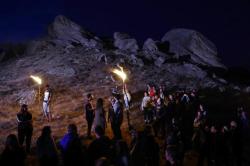