There is great potential for increasing the volume of export-import in all areas of trade cooperation between Azerbaijan and Kazakhstan.

The remark was made by Azerbaijan’s Energy Minister Parviz Shahbazov during the 17th meeting of the Joint Intergovernmental Commission on trade and economic cooperation between Azerbaijan and Kazakhstan, held in Baku on September 9.

The minister noted that the trade turnover between the two countries amounted to $62 million during the first seven months of 2021.

“Some 152 enterprises operating in the industrial, agricultural, trade, service, construction and transport sectors of Kazakhstan have been registered in Azerbaijan,” he said.

Moreover, Shahbazov highlighted that Azerbaijan invested $203.7 million in Kazakhstan during 1995-2021, while Kazakhstan’s investment in Azerbaijan amounted to $94.8 million.

He also touched upon the issue of observed bilateral positive trade dynamics in the energy sector.

“Today, Kazakhstan's crude oil and oil products are transported via the Caspian Sea and Azerbaijan to the Black Sea terminals. In 2020, SOCAR Trading S.A. purchased 106,000 tons of crude oil of Kazakhstan origin to supply more to the world market via the Baku-Tbilisi-Ceyhan pipeline. For seven months of this year, this figure amounted to 71,000 tons,” the minister added.

Noting the complex measures taken in Azerbaijan to increase the share of renewable energy sources in energy efficiency, production, and consumption, Shahbazov underlined that the exchange of experience in this sphere was successfully implemented. He added that the opportunities for cooperation with Kazakh companies interested in the field will also be considered.

The minister said that the Intergovernmental Commission plays an important role in the sustainable development of political, economic, and humanitarian relations between the two countries. He stressed that Azerbaijan and Kazakhstan are bound up with strong friendship and fraternal ties based on common history, similar cultural and moral values.

In turn, the Kazakh minister conveyed his congratulation on the occasion of the liberation of the historical Azerbaijani lands.

He stressed that the data on trade turnover between the two countries indicate the prospects for increasing the use of the existing cooperation potential.

Moreover, he noted Kazakhstan’s readiness to increase the supply of goods demanded for Azerbaijan’s economy.

Furthermore, Sultanov stressed that along with traditional trade and economic cooperation, it is necessary to create mutually beneficial ties in the effective reconstruction of transport, logistics trade chains.

“According to forecasts, by 2028 the volume of trade flows around the world will grow by 45 percent, and the bulk of logistics will be inland transport. Now our task is to correctly integrate the Trans-Caspian transport corridor into the global supply chain system,” the minister said.

Likewise, the minister highlighted that the agreement was reached between Azerbaijan and Kazakhstan on the establishment of a Business Council.

“Possible cooperation in the agro-industrial complex was discussed, including the inclusion of Azerbaijani partners in the trade and logistics distribution chain. We discussed the development of energy corridors and, of course, business cooperation between the two countries,” Sultanov wrote on his official Facebook page.

He stated that the two countries also agreed to work more actively through mutual Trading Houses.

“The Azerbaijani side even offered to encourage companies to work with Trading Houses. In general, it turned out to be a very constructive and fruitful dialogue," he added.

At the meeting, the current situation in the trade, economic, energy, transport, logistics, industrial and information and communication spheres, agriculture and food security, the activities implemented to develop bilateral ties, further steps to expand cooperation, joint measures in specific areas to further deepen cooperation in relevant areas were identified and discussed.

Additionally, at the end of the meeting, a protocol was signed on the outcomes of the 17th meeting of the joint intergovernmental commission on trade and economic cooperation between Azerbaijan and Kazakhstan.

The document was signed by the co-chairs of the joint intergovernmental commission - Azerbaijani Energy Minister Parviz Shahbazov and Kazakh Trade and Integration Minister Bakhyt Sultanov.

It was agreed to hold the 18th meeting of the Commission in 2022 in Nur-Sultan.

It should be noted that on September 9, Azerbaijan’s Economy Minister Mikayil Jabbarov and Kazakhstan’s Trade and Integration Minister Bakhyt Sultanov have also signed a memorandum on bilateral trade cooperation. 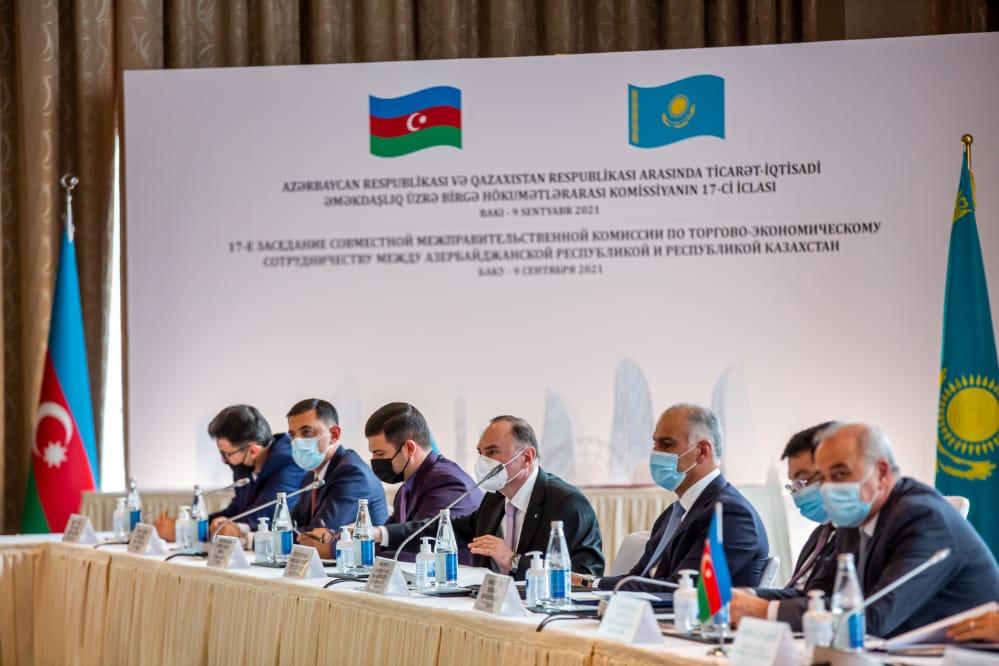