AZAL President Jahangir Asgarov took part at the International Paris Air Show 2019 in Le Bourget, where he held a number of important negotiations, Trend reports with reference to the company.

The Paris Air Show is the oldest air show in the world and one of the most significant and prestigious international exhibitions that showcase the latest developments of world manufacturers in the field of aviation and astronautics.

At the meeting of Jahangir Asgarov and President and Chief Executive Officer of Boeing Commercial Airplanes, Kevin McAllister, the partnership and friendly relations between Boeing and AZAL were highly appreciated. The sides reaffirmed their commitment to the agreements reached on the supply of new wide-body aircraft to Azerbaijan Airlines and Silk Way Airlines.

Jointly with Ambassador Extraordinary and Plenipotentiary of Azerbaijan to France Rahman Mustafayev, AZAL President held productive negotiations also with Hervé Dammann, Senior Vice President of Thales Group, with which Azerbaijan Airlines has strong partnership relations. The sides noted with satisfaction the opening of the Azerbaijan Airspace Supervision & Efficiency Center (ASEC) at the Heydar Aliyev International Airport. Views were exchanged on the establishment of a joint venture for the production of Thales company’s products in Azerbaijan.

Jahangir Asgarov also held negotiations with Alan Crawford, President of L3 Commercial Aviation Solutions, during which the sides discussed the supply of new training complexes for various types of aircraft. In addition, L3 Technologies can provide Azerbaijan Airlines with the most up-to-date technologies in the field of personnel training, flight simulation complexes, as well as combined theoretical and interactive training programs.

One of the most significant events of the Paris Air Show 2019 was the ceremony of awarding the world’s best airlines - World Airline Awards. Skytrax, the leading agency for assessing the quality of airline and airport services, named Azerbaijan Airlines as the best regional airline in Central Asia and India for the second year in a row.

“Receiving this award again is the best proof of the high quality of the services offered to passengers on our flights. Skytrax World Airline Awards are considered a mark of distinction in civil aviation. I would like to thank all the passengers of AZAL for their trust in us, as well as all the staff of the Airline in maintaining a high level of service quality” AZAL President Jahangir Asgarov said.

"Passengers continue to recognise the positive quality growth of Azerbaijan Airlines as they improve standards of onboard product and airport facilities. It is a great credit to all the Azerbaijan Airlines front line staff who have been so important to achieving this fantastic accolade from customers" Edward Plaisted, CEO of Skytrax said.

It should be recalled that according to the results of the last audit of Skytrax, AZAL also confirmed the prestigious status of a four-star airline.

It should be noted that Azerbaijan Airlines plans to greatly expand its activities at the Asian market in the near future. Starting from June 25, direct flight will be opened to the city of Delhi. Also flights to new directions in other countries will be opened.

Skytrax audits cover more than 800 criteria on service quality and staff work standards. Components such as an airline’s website, of the product as a whole airline's, presentation of information on it, convenience of online booking, and other services that are important from the point of passengers, were scrutinized. 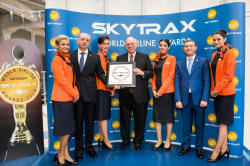 AZAL to continue operating special flights to Istanbul, Berlin and London until end of October [VIDEO]