Walk in footsteps of Paleolithic ancestors at Gobustan [PHOTO] Gobustan stands impressively as a prehistoric monument of unique importance, a World Heritage Site, surrounded by primitive monuments of art reflecting the culture, worldview, customs and traditions of ancient people.

Located on the territory of Azerbaijan, 60 kilometers from Baku, Gobustan is one of the famous archeological and historical reserves of the world.

This monumental ensemble is somewhat reminiscent of Stonehenge: huge stone statues depicting ancient periods of history. Not surprisingly, the place is firmly held in the list of popular places among tourists. Therefore, if you want to get to know this wonderful country, you should necessarily visit Gobustan.

Gobustan is especially famous for its rock paintings made during the Mesolithic period. Annually tourists from all over the world come to see the numerous works of art that were once made by primitive artists. All the rock paintings in Gobustan appeared at different times and belong to different epochs - from 10-8 millennium BC up to the Middle Ages. The images differ from each other in the variety of themes, style, structure, technique of performance.

The reserve has become a center that not only local scientists but also foreign archaeologists want to study and explore.

The well-known Norwegian explorer and traveler Thor Heyerdahl, who repeatedly visited Azerbaijan, after studying the Gobustan petroglyphs came to a sensational conclusion about the kinship of Norwegians and Azerbaijanis. He discovered the similarity of the ships depicted on the rocks to the vessels used by the Vikings, and concluded that the Vikings had begun their journey westward from here. He devoted the article "Communications of Azerbaijan" to this topic, which published in the English-language magazine "Azerbaijan International" (New York).

For many visitors acquaintance with the reserve begins with a museum in which the history of not only Gobustan but also the main stages of the development of human civilization are presented in an engaging and informative way. The museum consists of various exposition halls - sections equipped with interactive stands, touch screens, educational games, 3D video, etc.

The monuments of Gobustan are divided into two groups: rock paintings and ancient sites and other objects.

The first archaeological excavations on the territory of the reserve began in the 1930s. In 1939-1940, the Azerbaijani archaeologist Iskhak Jafarzade discovered here about 3,500 rock paintings, drawings and signs, as well as man-made pits, holes in rocks, etc. Since 1965, a special scientific expedition has been engaged in investigating the monuments of Gobustan. Archaeological research of more than 20 dwellings and shelters, more than 40 burial mounds was carried out.

Attention is drawn to the presence of solar symbols in the Gobustan petroglyphs. According to experts, during the Bronze Age, among the tribes inhabiting the territory of Azerbaijan, the cult of the sun was widespread, which is reflected in the petroglyphs of Gobustan. The solar signs are engraved in the form of a circle with rays or a crosshair. With solar mythology, are also associated with the second millennium BC the drawings of boats with a shining solar disk on the nose.

The subject of great interest of tourists is the Roman inscription - a record about the presence of the Legion XII Fulminata. On the territory of the reserve at the foot of the Boyuk-dash mountain there is a stone slab with a Latin inscription belonging to the 1st century AD. E., between 84 and 96 years, left by the Roman legion of Emperor Domitian with the nickname "Fulminata" (lightning), which recorded the stay of the XII Lightning Legion in the 1st century AD.

The meaning of the inscription is: “The time of Emperor Domitian Caesar Augustus of Germany, Lucius Julius Maximus, Centurion XII Legion of Lightning.” It is believed that in the Gobustan inscription, a detachment of the XII legion is mentioned, which was exterminated by the local inhabitants of Absheron.

Another attraction of Gobustan, which cannot be ignored by any tourist, is avaldash, an original tambourine stone, which is an established huge plate. From it one can tap rhythmically clear motifs. The sound of a gavaladash is similar to the sound of gaval. There are two gavaldashs in Gobustan: at the northern foot of the mountain Chingirdag and on the mountain Beyukdash.

Gavaldash consists of shell limestone and is a flat piece of limestone. It produces various sounds in different places, depending on the density of the shells in the composition of the limestone. The reason for this distinction of sounds is the emptiness and porosity of the shells.

If you take a look around, you can see the Caspian Sea on the one side and the cliffs on the other side, which makes it worth of visiting. Once the sea splashed right at the foot of these mountains, but then it retreated, leaving characteristic relief marks on the polished boulder rocks.

Now Gobustan is a real open-air museum. Every year this amazing art gallery is visited by thousands of people from all over the world. 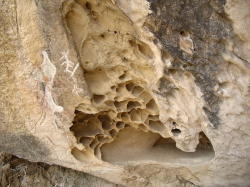