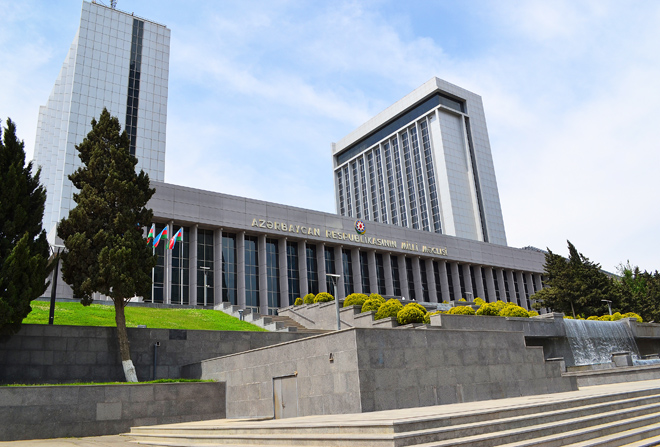 The Azerbaijani parliament considered several amendments during its regular plenary session on May 17.

Parliamentarians ratified an agreement on Air traffic between the governments of Azerbaijan and the United States. Ziyad Samedzade, chairman of the parliamentary commission on economic policy, industry and entrepreneurship mentioned that the agreement will simplify air traffic procedures between the countries, expand opportunities in this sphere and create healthy competition between airlines. The agreement envisages removal of state interference into commercial decisions taken by airlines and associated with rendering of more acceptable services in the sphere of passenger and cargo transportation.

MPs also adopted an amendment to the law on the List of items that may belong to certain parties of civil turnover and stay in turnover is allowed by special permission (with limited civil turnover). The amendment envisages entitlement to the use of pilotless vehicles on the basis of special permission. The permission is available by submitting the required documents to the Ministry of Communications and High Technologies. In accordance with the amendment the list also includes drones. The parliament adopted the amendment with a majority of votes.

Parliamentarians also proposed several amendments to the Code of Administrative Offences which were discussed during the meeting of parliamentary committee on the economic policy, industry and entrepreneurship. The amendment specifies coverage broadening of penalties for violation of rules on deal making by legal individuals with related parties as well as for the failure to provide information on such deals. In accordance with the current code banks are imposed by sanctions at the extent of from 2,000 to 2,500 ($ 1,327- 1,659) for officials and from 15,000 to 20,000 manats ($9,958-13,277) for legal individuals should they violate the rules on conducting operations with the related parties. The amendment also defines a notion of “conduct of operations with related parties”. The amendment proposes substituting the term by “violation of rules on deal making” and “failure to provide information on deals”. The fining for such violations will also be imposed on the non-bank credit agencies, stock companies and other legal entities.

The parliament also made several changes to the law on science after discussions at the second reading. Isa Habibbeyli, parliamentary committee chairman on the issues of science and education, said that the clause on the conduct of master’s degree program in two directions (specialized master course and research master course) has been excluded from the bill. “The clause is more significant and appropriate for the law on education,” Habibeyli said. The clause envisaging delay from military service for full-time students of master's and doctor's degree courses has also been excluded from the bill. “It is inappropriate to allow for postponing military service while the country is under war conditions and peace agreement is not signed,” Habibeyli said.

The law in effect specifies that bachelors are eligible to continue their education under these programs after military service. The bill also includes the issue of education crediting and repayment of debts after the start of labor activity. Currently the bill is envisaged for students of doctor's degree courses, it may be applied to the students of Master’s degree programs in the future. The bill was put to a vote and adopted.

The next plenary session is scheduled for May 20.