President of Azerbaijan Ilham Aliyev has met with Mayor of Rome Virginia Raggi.

President Ilham Aliyev hailed the results of his state visit to Italy. Noting that more than 25 documents were signed during the visit, the head of state underlined that Azerbaijan and Italy were strategic partners. “The strategic partnership will cover all areas of our cooperation.”

President Ilham Aliyev said that the meetings held during the visit were very fruitful. The head of state noted that relations between Azerbaijan and Italy were at a high level. The President pointed out that cultural cooperation and inter-city relations between Azerbaijan and Italy were also developing, adding that Baku and Naples were declared sister cities in 1972.

“A monument to great Azerbaijani poet Nizami Ganjavi was unveiled in Villa Borghese park in Rome in 2012. The Azerbaijani Cultural Center will also open in Rome.”

The Azerbaijani President stressed that a declaration to be signed between Baku and Rome would create wide opportunities for developing relations between the two countries` cities, adding that there was similar cooperation among other cities of the two countries.

Mayor Virginia Raggi thanked Azerbaijan for its support for archaeological excavations in Rome. She emphasized that they intended to continue cooperation between the cities of Baku and Rome. The mayor also underlined that numerous events would also be held in Rome as Italy declared 2020 as the Year of Azerbaijani Culture.

Following the meeting, the head of state and the mayor viewed the remains of an ancient site in Rome.

The head of state signed the guest book of the Mayor's Office.

The Ministry of Culture of Azerbaijan and the Mayor's Office of Rome signed an agreement during the official visit of President Ilham Aliyev to Italy in July, 2014, providing for the allocation of funds for archaeological excavations in the area of the Mercati di Traiano museum.

The head of state was informed of the works carried out here. It was noted that very important historical and archaeological discoveries were found during the excavations.

The discoveries were presented to President Ilham Aliyev.

It was stated that the residents of Rome praised the work done under the agreement and archaeological discoveries.

Then the Declaration of Cooperation was signed between the “Icherisheher” State Historical and Architectural Reserve and the Mayor's Office of Rome witnessed by President Ilham Aliyev.

The document was signed by Azerbaijan`s Foreign Minister Elmar Mammadyarov and Mayor of Rome Virginia Raggi. 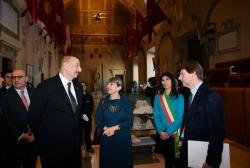