President of Azerbaijan Ilham Aliyev has met with Prime Minister of the State of Kuwait Sheikh Sabah Khaled Al-Hamad Al-Sabah in Munich.

The chairmanship of Azerbaijan in the Non-Aligned Movement was hailed at the meeting, and the ample opportunities for cooperation between the two countries within the organization were highlighted.

The sides stressed the importance of expanding economic and trade relations between Azerbaijan and Kuwait and further intensifying the activities of the intergovernmental commission.

They praised the development of cooperation between the two countries in the field of tourism. It was noted that there was a significant growth in the number of tourists coming from Kuwait to Azerbaijan, adding that Kuwait Airways will soon start operating flights to Azerbaijan.

The two countries` fruitful cooperation within OPEC+ was emphasized at the meeting. 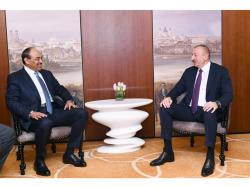