The Director General of NATO’s International Military Staff Lieutenant General Jan Broeks who is on a visit to Azerbaijan started it with attendance of the Alley of Martyrs. He paid tribute to the memory of Azerbaijani citizens who sacrificed their lives for the freedom and independence of their motherland and laid flowers on their graves, Trade reports referring to the Azerbaijani Defense Ministry.

Then the distinguished guest visited the War College of the Armed Forces and held a series of meetings. Lieutenant-General Jan Broeks addressed the military personnel with a speech on the NATO projects and programs, and areas of NATO-Azerbaijan cooperation. He also answered questions of the meeting participants.

Highly appreciating the Azerbaijan-NATO relations, the Director General of NATO’s International Military Staff spoke about the contribution made by Azerbaijani peacekeepers to international security within the framework of the missions conducted in Afghanistan, the active participation of Azerbaijani servicemen in the events of the Alliance and highly praised the level of training of Azerbaijani officers. 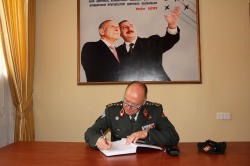