Azerbaijan State Philharmonic Hall has marked the the Republic Day, celebrated on May 28, with spectacular concert.

The young talents were accompanied by the Azerbaijan State Chamber Orchestra. They delighted the listeners with music pieces of prominent national composers such as Gara Garayev, Vagif Mustafazade, Tofig Guliyev. The concert also featured work by young talent Y. Abbasov, a student of P. Akhundova.

The project is headed by the director of the State Philharmonic Hall, People's Artist of Azerbaijan Murad Adigozalzade, project coordinator is Ayla Karimova-Zekeriyye.

Throughout the 2016-2017 concert season, various interesting programs were held within its framework to mark the 80th anniversary of the State Philharmonic Hall.

The concert also featured works by Azerbaijani and European composers.The musicians were accompanied by the State Chamber Orchestra. 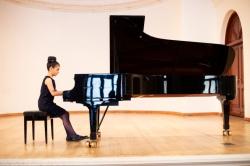