Azerbaijani designer Gulnara Khalilova has delighted the guests of the fifth season of Aspara Fashion Week (Kazakhstan) with stunning collection of outfits created with the use of kelagayi called "Silk Treasure".

The four-day fashion show was held virtually amid coronavirus pandemic, bringing together designers from many countries

Before the show, Gulnara Khalilova addressed the event. In her speech, the Azerbaijani designer stressed that her other fashion collections were successfully presented at Fashion Weeks and international events in Turkey, Russia, China, Austria, Romania, Great Britain, Kazakhstan, Kyrgyzstan, Uzbekistan and other countries. The designer plans to present her new collection on international catwalks in future. She also expressed her gratitude to the founder of the Aspara Fashion Week project, the famous designer from Kazakhstan Aidarkhan Kaliyev for the invitation.

Notably, this fashion collection was first presented in November 2019. The project was implemented jointly with the national brand "Azerbaijan Kelagayi" with the support of the International Mugham Center.

The event was dedicated to the fifth anniversary of the inclusion of traditional art and symbolism of  kelagayi in UNESCO's Intangible Cultural Heritage List. 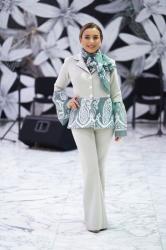