The 10th European Film Festival has kicked off in Baku. The festival brought  together world-famous film directors from Azerbaijan, Croatia, the Czech Republic, Finland, France, Germany, Hungary, Italy, the Netherlands, Spain, Lithuania, Sweden and other countries.

The film festival opened with screenings of two films: the Hungarian drama "Son of Saul" (2015) and the Finnish "One Last Deal" (2018), Trend Life reported.

"Son of Saul" film is set in the Auschwitz concentration camp during World War II, and follows a day-and-a-half in the life of Saul Ausländer (played by Géza Röhrig), a Hungarian member of the Sonderkommando. This is the first feature film directed by Laszlo Nemeš.

The film premiered on May 15, 2015 at the Cannes Film Festival, where it won the Grand Prix. In February 2016, the film got the Academy Award as the best film in a foreign language. It is the second Hungarian film to win the award, the first one being Szabó's Mephisto in 1981.

"One Last Deal" is a Finnish drama film directed by Klaus Härö and written by Anna Heinämaa. The film was screened in the Contemporary World Cinema section at the 2018 Toronto International Film Festival.

An elderly art dealer Olavi is about to retire. A man who has always put business and art before everything -even his family - cannot imagine life without work. At an auction, an old painting catches his attention. Olavi suspects it is worth much more than its starting price, which is low because its authenticity hasn't been confirmed. He decides to make one last deal in order to earn some proper pension money...

The 10th European Film Festival invites the audience to meet and interact with the leading European film directors.

The festival is organized by the Delegation of the European Union (EU) to Azerbaijan, in cooperation with the Embassies of the EU Member States accredited in Azerbaijan, Park Cinema.

The 10th European Film Festival will feature films from 14 EU countries, as well as a film by Azerbaijani film director.

Entrance is free but tickets should be obtained from the cash-desk of the respective cinema venue on the day of the film screening.

The 10th European Film Festival will be held in Baku until October 16. 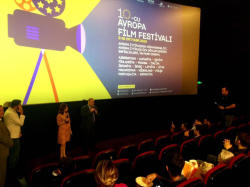