Azerbaijan invites Turkish businessmen to expand investments in production spheres of the country.

Chairman of Azerbaijan’s State Customs Committee Aydin Aliyev made the remarks at a meeting with Turkish entrepreneurs in Baku on July 18.

Addressing the meeting, Aliyev noted that there is an agreement between Azerbaijan and the CIS countries on free trade, which Turkish entrepreneurs will be able to benefit if they produce their products in Azerbaijan. Thus, their output will be exempted from customs duties when exporting to CIS countries.

The Chairman expressed disappointment that economic cooperation between the two countries' business is basically limited to trade and services sector, stressing a need to raise this cooperation to a higher level.

He stressed that in some cases, Turkish entrepreneurs try to avoid paying taxes on the supply of goods to Azerbaijan.

Aliyev noted that for those who want to invest in the Azerbaijani economy or to supply their goods to the country are created all conditions.

Turkish Minister of Customs and Trade Bulent Tufenkci, in turn, said that the trade turnover between Azerbaijan and Turkey does not reflect the existing potential between the countries.

"The trade turnover between Turkey and Azerbaijan amounted to $ 2.1 billion in 2015 which is a small figure, taking into account the great potential of our entrepreneurs," he added.

The minister voiced his hope for the growth of Turkish investments in the economy of Azerbaijan. He, in particular, expects Turkish companies to show great interest in the free trade zone created in the settlement of Alat in the Garadagh district of Baku and will become its first investors.

Then he highlighted Azerbaijan’s importance in implementing the joint railway project of Baku-Tbilisi-Kars (BTK), which is designed to revive the historical Silk Road.

The BTK railway is being constructed on the basis of the Azerbaijan-Georgia-Turkey intergovernmental agreement. The main purpose of the project is to improve economic relations between the three countries and gain foreign direct investment by connecting Europe and Asia.

The trade turnover between Azerbaijan and Turkey amounted to $1.2 billion in the first half of 2017, which is by 1.73 times more than the same period of 2016, according to the State Customs Committee of Azerbaijan. 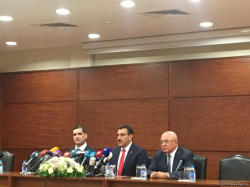