F 1 Grand Prix Azerbaijan winners have been awarded in Baku. 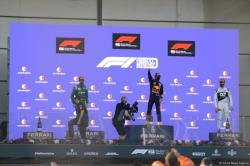